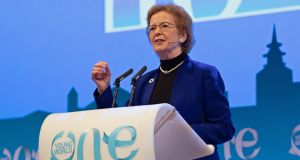 Mischief-makers may be lying in wait to cause trouble if a hard border is imposed on the island of Ireland, former president Mary Robinson has said.

Ms Robinson appeared to back Taoiseach Leo Varadkar’s comments on the risk of a return to violence, should customs posts be erected between Northern Ireland and the Republic.

Mr Varadkar has been accused of scaremongering after warning during this week’s EU summit that a return to violence is a possibility in such a scenario post-Brexit.

Ms Robinson, speaking to the Press Association at the One Young World summit in The Hague, said a hard border could provide a “visible opportunity” to those who wish to disrupt the peace process.

She said: “I think there is a real risk, if we had a hard border in Ireland, that there are people, as we would say, lying in the long grass, on both sides waiting to do mischief and unfortunately it could lead to that.

“We have had a peace process and a peace outcome that the world has admired. It’s really important that, on the island of Ireland, we live in peace and friendship and harmony, and that is what we have been doing.

“And I think it’s really important that we don’t have a border that provides a visible opportunity for those who could be not only disruptive but actually go back to violence.”

She added: “Most of the people that I have spoken to in Northern Ireland believe this.”

Addressing fellow EU leaders in Brussels on Wednesday, Mr Varadkar related the story of an IRA bomb attack at a customs post in Newry, Co Down, in 1972, in which four customs officials, two lorry drivers and three IRA men died.

But Mr Varadkar was defended by Tánaiste Simon Coveney, who said concerns about the potential to destabilise the island’s “very precious peace” were real.–PA