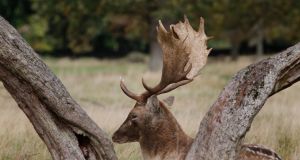 A stag having a rest in the Phoenix Park. Photograph: Nick Bradshaw/The Irish Times

The awards are dedicated to supporting the development of parks and open spaces “as critical elements in creating vibrant cities and healthy communities”.

The Phoenix Park was noted for its preservation of a “well-protected and managed heritage park,” with a broad range of activities and events serving the city of Dublin.

The Phoenix Park is the largest enclosed public park in any capital city in Europe and receives up to 10 million visitors every year. Dublin Zoo, the Victorian Walled Garden, Áras an Uachtaráin and the OPW Phoenix Park Visitor Centre are all located within the Park.

“I am both delighted and enormously proud to accept this award on behalf of the people of Ireland and in particular all the staff of the OPW who work to ensure the Phoenix Park in Dublin is maintained to the highest standards allowing it to be enjoyed and shared by the public,” said OPW Commissioner John McMahon.

“We look forward to continuing this tradition so that the Phoenix Park can be enjoyed by generations to come”.

Minister of State with responsibility for the Office of Public Works (OPW) and Flood Relief, Kevin Moran said: “Huge congratulations to the OPW team at the Phoenix Park who work tirelessly to ensure it is a wonderful tranquil space in the heart of the city.

“This award puts the Phoenix Park on the world stage and showcases Dublin as a green city with the park providing invaluable health, recreational and environmental benefits for so many communities.”