UK will not renege on backstop commitment, says Bradley 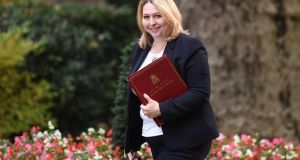 Northern Secretary Karen Bradley: ‘We are committed to everything we have agreed to in the joint report and we will ensure there is no border on the island of Ireland.’ File photograph: Iain Duncan Smith/EPA

The British government will not allow a border to be put in place on the island of Ireland “in any situation” Northern Secretary Karen Bradley has told British and Irish parliamentarians.

Ms Bradley said Theresa May’s government stands by its commitment to a backstop to guarantee that there would be no hard border after Brexit. Ms Bradley told the British-Irish Parliamentary Assembly in London that the British government was considering a proposal to extend the post-Brexit transition period which is due to end in December 2020.

“A suggestion has been put forward last week at the European Council regarding an extension of the implementation period as a way to deal with the Border,” she said.

“Now, we are looking at that. It is early days. It is a suggestion that has been put forward by the EU. And I want to be clear that we are committed to everything that we have agreed to in the joint report and we will ensure that there is no border on the island of Ireland.”

The Northern Secretary reiterated, however, the British government’s rejection of a Northern Ireland-only backstop that would create a customs barrier in the Irish Sea.

Irish ambassador to Britain Adrian O’Neill said the backstop had become an issue of trust in the Brexit negotiations and he made clear that it would be necessary even if the transition period was extended.

“So in the Withdrawal Agreement, we must have a durable, workable and legally operable backstop that guarantees that there will be no hard border on the island of Ireland. Should this require the possibility of extending the 21-month transition period by a further brief time, Ireland would agree to such an extension. However, this would not obviate the need for a legally sound backstop arrangement to be included in the Withdrawal Agreement,” he said.

At the weekend the Brexit secretary, Dominic Raab, suggested the EU and Britain would need to choose between extending the Brexit transition period and a time-limited backstop to avoid a hard border in Ireland.

A backstop is required to ensure there is no hard border in Ireland if a comprehensive free trade deal cannot be signed before the end of 2020.

Minister of State for European Affairs Helen McEntee told The Irish Times on Sunday evening that if London reneged on the backstop then agreements already reached on citizens’ rights and the so-called divorce bill could be reopened.

Pat Kenny ‘taken aback’ by scale of nursing home planned for site next to his home 16:52
Coronavirus: Northern Ireland reports 16 further deaths 16:46
Target to have all adults vaccinated by September ‘contingent on deliveries’ 16:38
Independent inquiry to examine mother and baby homes in North 16:27
Remote hearings of High Court personal injuries cases to resume 16:13