Abuse survivor in ‘Cinderella’ case urges others to speak out

People should not suffer in silence, says Cora Desmond (21) after stepmother is jailed 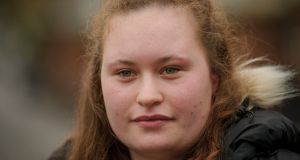 Cora Desmond: ‘I know there are people out there going through what I went through or worse and it’s horrible but I would urge anyone in that situation to speak out as soon as possible.’ Photograph: Daragh Mc Sweeney/ Cork Courts Limited

A young woman, who this week saw her stepmother jailed for a 10-year campaign of physical abuse and psychological torment, has urged anyone suffering domestic violence or mental torture not to be afraid to speak out as help is available and people will believe them.

Cora Desmond (21) had been physically assaulted and mentally tortured by her stepmother, Bridget Kenneally (49) from the age of six until she turned 16 at their home in Youghal in Co Cork. This week Kenneally was jailed for two years for assaulting Ms Desmond in 2009.

Ms Desmond told Cork Circuit Criminal Court how she was not only physically beaten with a poker, brush handle, hoover hand and other items by Kenneally but was also forced to eat food laced with salt, pepper, chilli powder, mustard and vinegar as punishment.

And she also told how Kenneally, who had three children from a previous relationship before she began living with Ms Desmond’s father, Cliff in 2004, used to get her and her older sister, Chelsea to clean up after her own children who were allowed go out and mix with friends while they were not.

“Bridget gave me the name Cora-Ella and told me I was just like Cinderella because I was the one that was not wanted or loved and that I should be treated like her,” said Ms Desmond as she told Judge Seán Ó Donnabháin that for 10 years she lived in fear of the next beating or punishment.

Speaking after the court case, Ms Desmond told The Irish Times that she would urge anyone who found themselves in any similar situation to speak out even though she admitted that for years she was terrified as a child to speak out as she feared further beatings and abuse from Kenneally.

“I know there are people out there going through what I went through or worse and it’s horrible but I would urge anyone in that situation to speak out as soon as possible – tell someone whether it’s a friend or work colleague or a teacher because you will be believed and people will help.

“And if, by speaking out now about my experience, I can help one person escape the torture and be free, then it will be worth it and I will be happy. It’s a hard thing to do to speak up but I would encourage people to speak out and get the justice they deserve.”

Ms Desmond said it was the constant fear of further beatings and punishment from Kenneally that prevented her from reporting the abuse but she pointed out that Kenneally was always telling her she would never be believed so she always covered up her injuries as Kenneally ordered her to do.

She said that when Kenneally squeezed her hands so tightly one day that she broke her thumb, she told doctors it resulted from a fall in the garden and she later told doctors at a Cork hospital that bruises to her face were caused by a fall at Funderland, just as Kenneally ordered her to tell them.

Similarly, although her teachers at Gaeilscoil Chorain logged her injuries and raised their concerns with Tusla as did doctors at the hospital she attended, the Tusla investigation never went anywhere as she always denied there was ever any physical abuse as she lived in constant fear of Kenneally.

“She would make me lie about the injuries – there was always an excuse for every single injury and I followed whatever I was told to say. I knew that if I spoke up, it would not end well for me because she would always threaten I would be taken away from Chelsea [Cora’s sister] and my dad and put in foster care.”

Ms Desmond said that Kenneally began beating her within months of entering the relationship with her father and she quickly became controlling and manipulative and she believed comparing her to Cinderella was a deliberate tactic to cause her as much upset as possible.

“I think the reason that she started calling me Cora-Ella was all about control – I was more or less constantly slaving around after her and her children but she took enjoyment in calling me Cora-Ella because she knew I hated it and it tormented me – it was just a kind of power thing for her.”

The Cinderella comparison was apposite in that Kenneally would make herself and Chelsea scrub the floors in the kitchen and bathrooms before going to school whereas Kenneally would never ask her own children to do any house work but instead let them out to socialise with their friends.

Meanwhile, the beatings continued, triggered by nothing at all – making a noise, failing to respond immediately if Kenneally called her – and every beating was justified on the grounds that it was her own fault and she fully deserved it for failing to do what she was told.

“The beatings got worse as I got older – she would use the sweeping brush, the poker, wooden spoons, metal spatulas, belts, the hoover pipe … I did plead with her for a while to stop but then I realised it was just useless, because the more I cried and begged her to stop, the more she beat me.”

Ms Desmond said the beatings were so frequent and regular that she came to view them as normal and was shocked to learn when talking with a friend in primary school that her parents did not beat her. “I thought it was completely and utterly normal because I didn’t know any different,” she said.

Finally, she could take no more and after turning 16, she broke down one evening when talking with her mother and her mother brought her to the gardaí in Youghal where she made a formal statement of complaint about Kenneally to Sgt Mark Ward.

“I wasn’t living with my mum so she didn’t know about this – she will say to this day that she had an idea something was wrong – she would ask me was everything okay but I would always deny it to the point that she began to think that she was mistaken.”

A week after she made the complaint to gardaí on April 13th, 2016, her father, Cliff learned of the abuse when gardaí contacted him and asked him to make a statement as part of their investigation. Within a week of learning of what had happened to his daughter, he separated from Kenneally.

“I didn’t tell my dad – he heard it from the guards – he was utterly in the dark about the whole situation – he was absolutely distraught and it still kills him to this day that he could have done something but he couldn’t have known as it was so well hidden.”

Ms Desmond said she was scared after finally going to the gardaí and after the gardaí contacted her father she knew Kenneally would learn the gardai had been notified about the abuse and she didn’t know how she would react.

“I didn’t know what she was capable of and I wondered could she beat me and do so much damage to me that I would die ... so I grabbed a few things and ran straight to my mum’s.”

Ms Desmond is full in her praise of Sgt Ward, not just for the thorough manner in which he investigated the case including obtaining records of her injuries from schools and doctors, but also for the support he gave during the protracted court process that took almost four years to finalise.

“I gave my initial statement to Sgt Mark Ward and he’s been an amazing help to me . . . he’s always been just a phone call away – he’s been remarkable.”

In court, Kenneally’s barrister, Patrick O’Riordan BL proffered an apology on behalf of his client whom he said was deeply remorseful for her actions, but Ms Desmond rejected the apology – a rejection that was acknowledged and respected by Judge O Donnabhain.

“It might sound selfish of me not to accept her apology but at the end of the day, l lived with her for 11 years and I know the way she is and the mind games she can play - she was only apologising because of the situation she was in – it was an apology just for show.”

Ms Desmond said she was still somewhat in a state of shock at the fact that Kenneally was actually jailed as she fully expected her to get either a suspended sentence or a community service order given the case had taken so long to come to a conclusion.

“I was shocked to be honest in the court. I asked Sgt Ward what was happening and he said ‘She’s going away, you’ve done it’. I still can’t believe it. I didn’t expect her to get any time to be honest, I expected her to walk free because it’s been so long coming.

“I don’t know if I feel relieved, I’m still processing it, I think. Going to court was nerve-wracking and it’s taken so long – I just thought this is it, I’ve wasted my time again, she is going to get away with it, but thankfully she didn’t and I finally got some bit of justice.”