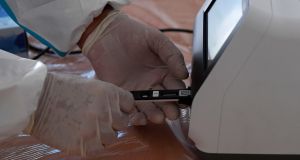 The European Union’s executive body has recommended the widespread adoption of quick antigen testing by member states to help curb an autumn surge of Covid-19 across the continent.

The tests can give results in minutes, but are less accurate than the standard PCR or polymerase chain reaction tests. Slovakia recently used the tests to conduct a mass screening of two-thirds of its population over a single weekend in a bid to root out the virus, an experiment set to be copied by Austria.

“Testing tells us what the extent of the spread is, where it is, and how it develops. It is a decisive tool to slow down the spread of Covid-19,” said health commissioner Stella Kyriakides.

The recommendation is that rapid tests should be used in circumstances where fast detection is required to contain an outbreak, or for regular screening of high-risk groups, such as medical personnel and in care homes.

The tests could also be used to separate out positive Covid-19 cases among patients in healthcare facilities, the Commission said.

“Obviously, the RT-PCR testing should be used where possible. However, due to the time taken to get a result using PCR testing, there may be benefit in looking for a testing system that delivers quicker results especially in emergency or in point-of-care scenarios. There are clearly many scenarios where a rapid, antigen test could be used,” Kelleher said.

Funding of €100 million is to be allocated by the Commission for the purchasing of rapid antigen tests for EU member states.

The Commission had wanted to go further and recommend the use of the antigen tests to screen travellers before flying as a way to ease travel between EU states, a change strongly supported by the struggling aviation industry.

But the proposal was blocked by many member states that opposed the use of the tests in those circumstances.

Instead, the Commission’s advice calls for the use of the tests for travellers to be “further considered” as more evidence comes to light and the pandemic evolves.

Antigen tests have been divisive among health experts because of their comparatively high rate of false negatives, which mistakenly clear people for Covid-19 who have the virus, something some experts fear is counterproductive as it may give false confidence to people who go on to spread the virus to others.