There is ‘significant fundraising potential for the theatre’ 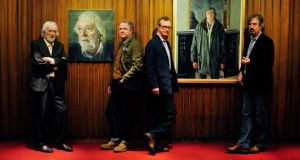 At the unveiling of their portraits in the Abbey Theatre last night were (from left) playwrights Tom MacIntyre with artist Colin Davidson and Sebastian Barry with artist Mick O’Dea. Photograph: Aidan Crawley

The Abbey Theatre is seeking to raise more than €1 million a year, mostly from overseas donors, over the coming years.

The Abbey is currently seeking tenders for “the services of a professional, results orientated fundraiser, individual or organisation.”

The notice requesting tenders says the Abbey is of the view that there is “significant fundraising potential for the theatre internationally”, including North America. It says a strategic goal is to diversify the theatre’s income streams to secure sustainability in 2013/14 and for the future. International fundraising will be “vital”to secure the theatre’s future, it adds.

The theatre’s director Fiach Mac Conghail said the Abbey had to make up for a 30 per cent cut in State funding since 2008 when it received €10 million from the Arts Council.

That was down to €7.1 million last year. Box office returns remain steady at about €2 million a year.

Mr Mac Conghail said the tender process was part of a “strategic interest” in raising money through fundraising, but it was not part of the initiative started by Minister for the Arts Jimmy Deenihan, who wants arts bodies to look for philanthropic donations to sustain their activities.

“I would hope to raise, between Irish and international money, over a million a year by 2016,” Mr Mac Conghail said.

Last night the Abbey unveiled portraits of two of its most distinguished playwrights. The portrait of Sebastian Barry was painted by Mick O’Dea, while Tom MacIntyre was painted by Colin Davidson.

MacIntyre (82) has had 16 plays staged at the Abbey Theatre stretching back to 1972.

‘Crystal of hurt’
Paying tribute to him, fellow playwright Marina Carr said MacIntyre had shied away from the “aesthetic inertia that is always threatening the professional writer.

“There is a far thing in MacIntyre, pierced and lonely, some crystal of hurt transmitting a pure signal.”

Playwright Colin McPherson said of Barry, whose theatre productions include Hinterland and Tales of Ballycumber, that his best work was about families.

He complimented both of the painters for capturing “something of the authors and there is a sense of personality about both paintings which is reflective of their plays in a funny way.”