A bridge, a border and two Covid worlds

Cavan has got its Covid numbers down while Donegal lags behind

Donegal and Cavan were recording some of the highest Covid infection rates in the country and many in those areas blamed the numbers on diverging restrictions on the other side of the border. Video: Harry McGee 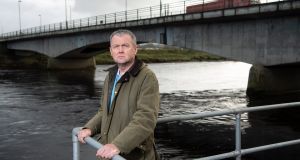 To understand Donegal’s Covid-19 quandary one must stand on a bridge over the Foyle separating two towns. On a November day, Strabane, the town to the east in Tyrone, is lit up like a Christmas tree.

Shops, cafes and restaurants there are open. The car park of a massive Asda supermarket is almost full – and there are a lot of Donegal-registered cars in its carpark.

For Lifford, the town to the west, it’s as if someone pressed a pause button at the beginning of October. On a gloomy rainswept November afternoon, the streets are unlit and desolate. Just a few shops are open.

Over 20 minutes, one solitary figure hurries through teeming rain, though the traffic across the bridge is constant and heavy. Two months into restrictions, Strabane is to locked-down Donegal what a fix is to an addict.

“The strange thing about the Border for us who live along this Border is there is no border in reality,” Sinn Féin councillor Gary Doherty says. “People cross the bridge 10 to 20 times a week.”

So the Lifford Bridge explains much about why Covid-19 rates have soared in Donegal and have stubbornly remained high. Derry and west Tyrone, and Donegal, are in separate jurisdictions politically, but that’s all.

Derry and west Tyrone have, at times, had stratospherically high Covid-19 numbers, but Northern Ireland’s restrictions have been shockingly light compared with the Republic’s Level 5 restrictions.

In Donegal it never scaled those vertiginous heights, even though the fortnightly rate in Buncrana and Lifford went over 600 at one point, though it has dropped since.

Both counties (alongside Monaghan) were pushed up to Level 4, and then to Level 5 with the rest of the State. Since then the paths of Donegal and Cavan have diverged. In the last month, Cavan has got its rate down to 89 per 100,000, one of the State’s lowest.

Cavan’s spike was blamed on over-zealous celebrations after the county’s senior football club final in October. If the GAA’s reputation was tarnished by that, it repaired its hand on Sunday night when Cavan won the Ulster final after a gap of 23 years. The celebration was a socially-distanced drive-through with a procession through Breffni Park of hundreds of cars.

“I was very pleased to see the way it was organised and the way it was socially-distanced,” says Siobhán Smith, a primary school principal in Ballymoneen, Bailieborough.

“Maybe because the county finals were supposed to have increased the numbers, people were more prepared to make sure there was no recurrence.”

By contrast, Donegal has been a laggard, with its fortnightly rate still the highest in the country at 240.

So why does one border county get a gold star and the other a ‘must try harder’ note? There are a number of reasons but the primary one is the porosity of the Border in Donegal.

No other border region has Northern towns and cities sitting right on the dividing line, overlooking the Republic like citadels. Sligo, Leitrim, Cavan, Monaghan and Louth have cross-border traffic, but motorists must go for a distance to get to Enniskillen, or Portadown or Newry.

Donegal, Derry and Strabane are completely integrated for business, shopping, school and work, says Dr Anthony Breslin, HSE director of public health for the northwest. “You are not going to get away from that,” he says.

The Northern authorities only tested people with symptoms, not when they were contacts of an infected person, which adds nearly a half onto the real figures, he believes.

“It meant that if you went into Derry or Strabane to get a new set of tyres for the car, there was a higher chance of you meeting somebody with Covid there than in Donegal. And people coming across from the North, they would pass it on by coming into Donegal if they were not taking precautions,” said Dr Breslin.

Not everything in Donegal can be blamed on the Border, though, since it has had multiple clusters caused by communions, christenings, weddings, retirements, funerals and sports events, mainly GAA.

“People were not taking the precautions they should be taking,” said Dr Breslin. “We had some pubs which were disregarding the advice, all over the northwest, not just Donegal. There were a lot of house parties. Wakes were also a big thing.”

Dressed in blue scrubs and PPE, Lifford GP Paul Armstrong takes a break from a busy afternoon surgery to remember September 12th when three cases appeared in his practice. “[We] knew something was happening,” he says.

Within days Donegal was in an upward spiral. Letterkenny-based GP and former cabinet minister Jim McDaid noticed it, too. Rates were rising, but behaviour did not change. People still criss-crossed the Border for school, work, to visit family and to socialise, he recounts.

“I have heard politicians say people complied with the rules. That has sadly not been my experience nor that of other doctors I know in Donegal,” he says in his Letterkenny clinic.

“There were house parties, visiting friends and other events. As a young woman said to me of [her age cohort]: ‘There is no fear in them.’ Some were called ‘wimpish’ when they refused to socialise,” he goes on.

Sinn Féin’s Gary Doherty remembers the feeling when Level 5 restrictions were first imposed on Donegal: “I said at the time we could not sugar-coat it. It was going to be tough.”

Solid local businesses like McElhinneys store in Stranorlar and the Old Courthouse in Lifford were affected, while those just a short distance away were not.

“Lifford has had tighter restrictions than Strabane. It does not help anybody. We don’t have an all-Ireland approach to Covid and in Donegal that absence is felt more keenly.”

Poverty in east Donegal and west Tyrone has brought its own effects, too, say Independent TD Thomas Pringle, and Alan McMenamin, a Ballybofey community campaigner who delivered food in the first lockdown.

Then, McMenamin was shocked by the poverty he saw, remembering one low-paid Covid-19 positive worker telling him that her boss had warned her that she would be fired if she told her fellow workers.

However, others say people in Donegal were prepared to identify themselves if they had Covid because of the existence of the Pandemic Unemployment Payment

If anything, it was people in Tyrone and Derry who were reluctant to do so, said Dr Armstrong. “That may be why there were infections running under the radar there.”

In recent weeks compliance has improved in Donegal. Numbers in the community are down, though the county picture is distorted by an outbreak in Letterkenny General Hospital.

“Figures are down significantly in the practice,” Dr Armstrong notes. “There is a trickle of cases. We are not seeing the significant community transmission that was a feature six weeks ago.”

Cross-border travel for work and family is high, too, in Cavan, but not to the same degree as Donegal, though the county was shocked by its October numbers, says Siobhán Smith: “People behaved themselves better. I definitely would have noticed more people wearing masks.”

Since then, Cavan numbers have plummeted, though both counties, like elsewhere, reflect fatigue and weariness and a yearning for normality to return.

Passionate about her home town of Bailieborough, Fianna Fáil TD Niamh Smyth fears that Covid-19 has accelerated changes to the east Cavan town’s main street that have been underway for years.

Retail changes have “taken the heart and soul out of towns like Bailieborough. People from here travel as far away as Blanchardstown [80km away in west Dublin] to do their shopping.”

Standing on Market Square, Smith looks at the shuttered pubs, the Square Bar and the Lemon Tree, as well as the local Bailie Hotel where crowds would normally gather on a Saturday night.

Everywhere, the feeling is the same: this lockdown must be the last. “It is devastating for [businesses]. There is nobody who does not share their concern and sadness,” says Siobhán Smith.

Though many people have not followed rules in the past, people must be trusted now, says Dr McDaid, who has long argued against Nphet-orchestrated restrictions.

“Let us move away from lockdown chaos,” said the former Fianna Fáil minister, who wants the State to protect the vulnerable elderly, and others, but let others enjoy more freedom.

This does not mean that the elderly should be “cocooned”. Instead, they should be tested more regularly: “I’m not saying young people can let it rip. They have to be more responsible.”

Accepting the yearning for normality, Dr Breslin says: “You can’t put 100 people into a small pub because it would not be safe. But there is a certain amount we can do.”

Pubs and restaurants that fully comply with safety rules should reopen: “It can be done, if people want to do it. I don’t want people locked up or cocooning or losing their business and that’s not fair to them.”

Rural and small town pubs are crucial, too, for Niamh Smith: “It’s where people socialised. It’s where people get to meet up and it might only be once a week. This is not urban city Dublin. This is small rural Cavan. We need those businesses because, if they are not open, they have a knock-on effect for everybody else.”

In Lifford, Gary Doherty looks ahead to Christmas: “That is the thing that has kept people going. There is a weariness there. People need to see a light at the end of the tunnel.”

His fellow townsman, Dr Paul Armstrong agrees, fearing that another lockdown in February and March will not get “the same level of compliance”. In Lifford that could be a bridge too far.