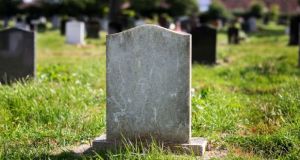 The family of Irish-born Margaret Keane want the words ‘In ár gcroíthe go deo’ to be on the headstone on her grave. File photograph: iStock.

A family appealing against a decision that an Irish phrase on a gravestone in an English churchyard must be translated into English are to have their legal costs covered.

Relatives of Irish-born Margaret Keane (73), who died in July 2018, wanted the words “In ár gcroíthe go deo” (“In our hearts for ever”) inscribed on the headstone at her grave at St Giles burial ground in Exhall, Coventry.

Stephen Eyre QC, a judge in a Church of England ecclesiastical court, ruled a translation of the inscription must also be included as there was a risk it could otherwise be seen “as a political statement”.

Ms Keane’s family appealed against the decision, but have been faced with a legal bill into the thousands of pounds.

But in a statement on Wednesday, the family said the Church of England had agreed to pay their costs.

“After enduring the agonising burden of facing substantial costs, the family of Margaret Keane was very relieved to receive confirmation last week from the Church of England that sources within the church will pay for the family’s court costs in respect of their ongoing appeal to overturn the decision made by the Chancellor of the Dioceses of Coventry, Stephen Eyre, to refuse an Irish only inscription on their mother’s grave,” the statement said.

“Although the family’s legal team are acting on a free of charge basis the ecclesiastical court (which is separate to the Church of England) is entitled to charge costs. This has been an immense burden to bear from a long period of time. To date, the family have paid a total of £2,085.60 in court costs (with £42 and £129 refunded to date).

“The family’s initial request to the Arches Court of Canterbury (where the appeal is to be heard) for costs to be waived was initially denied.”

The statement said the family renewed that request in August 2020, on receiving a further bill of £1.054 from the court. It had now been confirmed that the family will be reimbursed the remaining £1,914.60 they have paid to the court to date.

It has also been confirmed that the family will be given assistance from sources within the church to cover their future court costs, the statement concluded.

In June, in an open letter to Church of England Bishop of Coventry Christopher Cocksworth, who has jurisdiction over the churchyard, Bishop of Cashel, Ossory and Ferns Michael Burrows said he would make sure the family was made aware of its legal rights.

In his letter, Bishop Burrows noted that a key aspect of the peace process had been “to make clear that Irish language and culture can have a legitimate place in the richness of the British polity”.