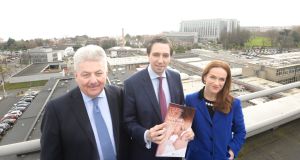 The proposed move of the National Maternity Hospital to the St Vincent’s campus at Elm Park in Dublin will only proceed on the basis of existing agreements that give ownership and control of the new hospital to St Vincent’s Healthcare Group, according to the group’s chairman, James Menton.

The announcement by the Sisters of Charity that they are withdrawing from involvement in the three hospitals owned by the group has given Minister for Health Simon Harris “enormous clarity”, he said. However, for the project to proceed, it must do so in accordance with the agreement mediated by Kieran Mulvey last November, Mr Menton stressed.

He said the announcement marked a “historical and momentous” day for the hospital’s 4,000 staff and represented an “extraordinary act of generosity” by the Sisters of Charity. “While it’s the end of an era, it’s the start of another one,” he told The Irish Times.

Withdrawing from St Vincent’s had been “on the radar” for the order in recent years but they had decided to bring the announcement forward to “facilitate” a go-ahead for the National Maternity Hospital project, Mr Menton said.

“The idea they were forced into this is a complete misrepresentation of the facts. They didn’t ring me up two weeks ago and decide this is what they wanted. This takes months of planning.”

He said the new structure, which would see the order withdraw and ownership assumed by a company to be known as “St Vincent’s”, was being organised under the laws of the land, “not some opaque trust”.

Mr Menton criticised the focus in public debate on who will own the maternity hospital when it moves to St Vincent’s.

“There has been a lot of simplistic talk, predicated on ‘we paid for the hospital so we should own it’. That’s a completely inaccurate interpretation of the facts, and it does not recognise the tried and tested set of legal agreements on the site over the past 10 years.”

The State has invested €350 million up to now, and last year provided €225 million in funding, “and yet nobody asked us about ownership of St Vincent’s University Hospital”.

The notion that the State could own the new hospital simply because it provided the funding was a “facile premise”, Mr Mention said.

St Vincent’s needed to have ownership of the new hospital in order to ensure there were integrated systems of clinical and corporate governance on its campus. “If you separate ownership of the facility you run huge risks around the seamlessness of the ‘one patient, one doctor’ principle.”