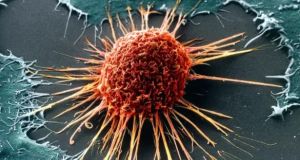 An electron micrograph of a cervical cancer cell. About 90 women die from the disease in Ireland annually.

Women should be screened for cervical cancer every five years instead of at three-yearly intervals as at present, the State’s health watchdog has recommended.

By also changing the current screening method, the Health Information and Quality Authority (Hiqa) says the new approach will lead to more efficient detection of cancers from fewer tests for adult women.

Twenty per cent more precancerous abnormalities will be detected and 30 per cent more cervical cancer cases and deaths will be avoided for every screening test carried out, compared to the current screening strategy.

Hiqa says women aged between 25 and 30 should be tested every three years because the HPV (human papillomavirus) is more common among younger women and this group has not received the HPV vaccine.

The Irish Cancer Society said in a statement that a move to primary HPV testing would also reduce the number of screenings a woman would need in her lifetime.

Women would experience no change in how the cervical screening sample is collected.

“Primary HPV screening is a better test which allows all women who participate in cervical screening to become aware of their current HPV status and those who are at higher risk of cervical cancer to be picked up earlier,” according to Hiqa’s director of health technology assessment Dr Máirín Ryan.

Where a woman is found to be HPV-positive following primary HPV screening, a follow-up test using cytology would be carried out on the same sample to inspect for cellular abnormalities. If any abnormalities are detected, a more detailed examination of the cervix (colposcopy) is carried out.

“Women with a negative HPV test can be reassured that they are at very low risk of developing precancerous abnormalities in the next five years. For this reason, we advise that the interval between screenings can be increased to every five years for those currently being screened three-yearly,” Dr Ryan says.

Hiqa says screening coverage could also be extended up to age 65 years for women who have only had access to CervicalCheck from age 50.

Head of research at the Irish Cancer Society Dr Robert O’Connor said: “The women of Ireland deserve the best possible services when it comes to the prevention and early detection of cancer. A move towards primary HPV testing gives them this.

“We call on the Minister for Health to heed Hiqa’s advice and move CervicalCheck to this form of testing, which is in the best interests of all women in Ireland.”

Next year, the first women vaccinated against HPV as part of the national school-based immunisation programme will become eligible for CervicalCheck. These women are at lower risk of developing cervical cancer.

However, as the current vaccine does not protect against all virus types, Hiqa says vaccinated women should still attend for regular cervical screening.

The change to testing arrangements proposed by Hiqa would save €3 million for women who have received the HPV vaccine, €32 million for the unvaccinated cohort and up to €35 million for the whole CervicalCheck population over an eight-year period from 2018, the authority estimates.

Cervical cancer kills about 90 women in Ireland each year.