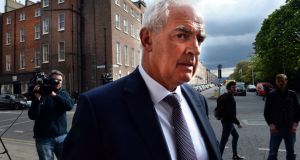 Former master of the National Maternity Hospital Dr Peter Boylan said the thanks of the State should go to the Sisters of Charity for their “brave decision” and to the Minister for Health. Photograph: Dara Mac Donaill/The Irish Times

The former master of the National Maternity Hospital Peter Boylan has said he feels personally vindicated by the decision of the Religious Sisters of Charity to end their involvement in St Vincent’s Healthcare Group (SVHG).

After deep concern that the the order would dictate medical care at the planned €300 million national maternity hospital on the St Vincent’s Hospital campus in Dublin, the Sisters confirmed on Monday they were completely relinquishing involvement in the site.

Dr Boylan, a leading obstetrician, had spoken out against the decision for the nuns to retain ultimate ownership of the hospital under a complex corporate structure.

He questioned if they could influence whether women could have terminations if their life was at risk, seek IVF treatment, sterilisation or contraceptive care.

Shortly after speaking out in the controversy, he resigned from the board of the current national maternity hospital.

Following the Sisters of Charity statement that they would have no involvement in the new company, Dr Boylan said the decision was “noble and honest”.

He said the order deserved full credit for it, but that they should not have been put in the position in the first place.

Dr Boylan told RTÉ’s Today with Seán O’Rourke show that the order’s work in the area of surgical and general medicine needed to be acknowledged.

He said the thanks of the State should go to the Sisters for their “brave decision” and to the Minister for Health.

Dr Boylan said the support he had received from people from all over the country had been “overwhelming” and he had made many new friends, but it had been “very stressful” and he had not wanted to end his career at the hospital in that way.

He will now continue to be a governor and attend clinical meetings.

“I don’t feel any personal animus to people or from them towards me. Everyone is an adult in this situation,” Dr Boylan said.

He compared the situation to playing rugby, “you tear strips off each other on the field, but shake hands afterwards”.

However, he admitted he had not slept much during the period when he was at odds with the current Master of Holles Street and the de facto chairman of the board.

“It was stressful and I didn’t sleep much, but as an obstetrician you get used to not sleeping much.”

Orla O’Connor, director of The National Women’s Council of Ireland (NWCI) , said the organisation welcomed the decision from the nuns.

“NWCI with all our members have rigorously campaigned for the removal of religious interests and for State ownership of our new national maternity hospital as its in the best interests of women and their healthcare needs,” she said.

“ Women must be able to trust their maternity hospital and know that they will be treated in a compassionate and non-judgmental way.

“This will be more important for our maternity hospitals in the future when abortion services will be provided in Ireland.”

The Association for the Improvement in Maternity Services (AIMS) Ireland praised the sisters for their “very clear and honest response” to the concerns of the public.

AIMS Ireland noted the sisters wished the new facility would follow in the ethos of its founder Mary Aikenhead “whose mission in life was to heal and care for the sick and poor”.

“The new National Maternity Hospital must, as the order has stated, remain true to this ethos but must also adhere to an ethos of best-practice, evidence based care for all. Only then can it be the truly independent, secular, modern care facility that the people of Ireland demand and deserve,” said AIMS Ireland chairwoman Krysia Lynch.

Termination for Medical Reasons (TFMR) Ireland chairman Gerry Edwards said the sisters had done “the right thing and we honestly hope that it is an example that can be followed by other congregations throughout Ireland.”

TFMR Ireland is made up of parents who received a diagnosis in pregnancy of fatal or severe foetal anomalies.

Mr Edwards said it was important that the new hospital adopts a wholly secular ethos.

“Before so much as €1 of public money is spent on the much needed maternity hospital, we must all be assured that the board of the new hospital will be able to provide lawful termination of pregnancy services to those public patients who wish to avail of them,” he said.

Minister for Social Protection Leo Varadkar, who was involved in negotiations when minister for health, welcomed the decision and said he wished to acknowledge the contribution of the Sisters of Charity to Irish healthcare.

“This decision, I believe, is in the best interests of both the organisation and of patients, and will provide a blueprint for other religious organisations to follow,” he said.

“The Sisters of Charity have provided excellent medical and nursing care to the people of Ireland for generations. Their contribution should be recognised and celebrated, but in 2017, it’s time to find a better and more modern model for the delivery of acute and maternal health services.”

Sinn Féin health spokeswoman Louise O’Reilly described the decision as “hugely significant” as the public had made it clear that the provision of health services should be free of “religious interference”.

Sinn Féin councillor Mícheál Mac Donncha, who also sits on the board of the National Maternity Hospital, welcomed the nuns’ statement which he said would remove the possibility of their “undue influence” on the ethos of the hospital.

However, he maintained the issue of ownership had not been dealt with satisfactorily. “This thing is not resolved. If that’s the sum total of what the minister (Harris) has achieved in the last month, it is not sufficient.”

He pointed out that the Dáil had supported a motion put down by Sinn Féin calling on the new hospital to be retained in public ownership.

People Before Profit TD Bríd Smith described the decision as “historic” and called on the Bon Secours order to follow suit and withdraw from the provision of health services. Both orders, she said, carry a “seriously damaged legacy of cruelty to women and children both in the Magdalene laundries and in the mother and baby homes”.

Social Democrats TD Róisín Shortall said the “widespread public outcry in relation to the decision has been heard and heard loudly”.

However, she cautioned that a private entity would still own the publicly funded hospital.

“This effectively means that the State will hand over €300 million to a private organisation and relinquish control of governance, including clinical governance to that organisation,” she said.

Uplift, the organisation which garnered more than 100,000 signatories against religious ownership of the new hospital, described the announcement as a “great victory for people power”.

Uplift founding director Siobhán O’Donoghue said the decision demonstrated that it was possible for ordinary people to affect change.

Some 104,500 people signed the petition and others contributed to buying full page advertisements in national newspapers.