The World Health Organisation has warned governments that "this is not a drill" as coronavirus infections near 100,000 worldwide. 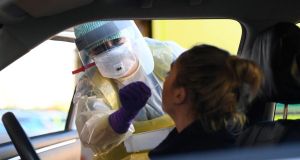 Senior officials expect there will be hundreds of cases of the coronavirus in Ireland by the time the Dáil returns in a fortnight’s time, according to sources briefed on the Government’s planning for the spread of the virus.

Ministers have also been briefed about the possible widespread closure of schools, postponement of sporting events and other mass gatherings and businesses in order to contain the spread of the virus, but they have also been told there is no indication yet that this will be necessary.

Senior health officials are optimistic that they can avoid widespread community transmission of the virus, though sources stressed they expect the numbers to rise quickly over the coming days.

Ministers were told at Wednesday’s Cabinet meeting that a broad range of “non-medical” interventions by the Government – including closures of public buildings, cancelling of some public transport services and travel restrictions – would be considered if transmission of the virus became widespread in the community.

However, Ministers were told that it was not envisaged that borders would be closed in any circumstances.

They were also told that while it was too early to assess how the Irish economy would be affected, the areas of agri-food, tourism, retail and manufacturing would be hit worst.

Sources said that it was stressed that although contingency plans for all scenarios were in place, there was no indication that the worst-case scenario was likely here.

Senior officials and doctors believe that because Ireland is “about two weeks behind” Italy in terms of its infection rates, it stands a better chance of containing the outbreak.

A group of high-ranking officials has been formed to advise the Cabinet committee on the virus, which is chaired by the Taoiseach and is due to meet next Monday.