Coronavirus timeline: The cases confirmed in Ireland so far

What we know: Latest tally brings to 18 the number of Covid-19 cases in the Republic 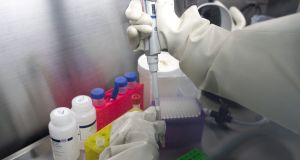 As the number of global coronavirus cases approaches 100,000, the number of confirmed cases in the Republic had more than doubled by Friday, bringing the total to 18, along with four others in Northern Ireland.

Here is a timeline of the confirmed cases:

The first confirmed case of the coronavirus in Ireland was announced by the National Public Health Emergency Team on Saturday night. It followed another case confirmed in Northern Ireland earlier in the week.

The teenager had become ill after returning from Italy and was placed in isolation in a Dublin hospital.

A north Dublin school with 400 pupils announced on Sunday it would close for two weeks after one of its students was confirmed as having the coronavirus. Public health officials order the closure as a precautionary measure and to minimise the risk of person-to-person transmission of the disease.

The second case of the coronavirus in the Republic was confirmed on Tuesday evening after a woman who had recently travelled from Italy tested positive.

On Wednesday, it was confirmed that a family of four in Co Clare had tested positive for the virus after returning from a skiing holiday in northern Italy.

One of the family members, a healthcare professional, had worked in University Hospital Limerick’s emergency department before being diagnosed nine days after returning from the holiday. Efforts to trace people who came into contact with the four people are ongoing.

These include patients who attended the minor injuries zone of the hospital’s emergency department between 10am and 2pm on Wednesday, February 26th.

The hospital closed for three hours on Wednesday for a deep clean and patients were directed to other hospitals.

These cases, the first cluster of positive tests in the Republic, forced the closure of three schools in Co Clare as a precautionary measure.

One of those who tested positive had travelled from northern Italy while the other had recent contact with a person elsewhere in the UK who had subsequently tested positive for Covid-19, said the North’s health minister Robin Swann.

On Thursday evening, the Provost of Trinity College Dublin sent an email to its 17,000 undergraduate and postgraduate students and about 2,600 staff members informing them that a positive case of Covid-19 had been confirmed “within” the university.

Another three new cases of the virus were confirmed among men from the east of the country who had recently travelled from Italy.

Two women who were connected to the cases reported in Co Clare earlier in the week also tested positive.

A man who had been in Cork University Hospital (CUH) for up to a week was also diagnosed. It is understood the man, who received treatment in the hospital last week and was discharged, may have had contact with a large number of staff and sick patients before he was tested. However, it is not clear how he came into contact with the virus.

CUH has cancelled elective surgeries and imposed visitor restrictions along with the clearance of further space for isolating patients. The patient is receiving intensive care in an isolation unit at the hospital.

Just prior to this announcement in the Republic, a fourth case was confirmed in the North by the UK Department of Health.