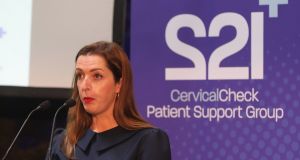 Campaigner Vicky Phelan: ‘We’re living in a country where people think they can get away with it at a management level and not be sanctioned.’ Photograph: Niall Carson/PA Wire

Women impacted by the CervicalCheck controversy have called for the introduction of new laws making managers in the public service accountable for the errors they make.

Unless the law is changed, “we are going to keep having scandals of this nature again and again and people will not be held accountable,” Vicky Phelan, the Limerick woman whose court settlement last April brought the controversy to light, warned.

“We don’t have a situation in this country where there is any legal accountability for management. There are bodies for doctors and nurses [but] we’re living in a country where people think they can get away with it at a management level and not be sanctioned.”

Ms Phelan was speaking at the launch on Sunday of a new support group for the 221-plus women affected by the controversy. The 221+ CervicalCheck Patient Support Group, funded by the Department of Health for three years, will provide expertise and advice to the women, all of whom have been diagnosed with cervical cancer, and their families.

Only about 50 of the 221-plus women have consented to their smear tests being re-audited in a Government-ordered review being carried out by the Royal College of Obstetricians and Gynaecologists (RCOG) in the UK, the meeting heard.

Some of the women have been advised not to give consent because their lawyers fear it may prove difficult to retrieve their slides afterwards for use in future litigation. The low consent rate means the review will struggle to establish how many women had their slides misread and what difference this made to their medical outcomes.

There are a lot of answers still to be answered

Ms Phelan said she still felt it was correct that HSE director general Tony O’Brien and CervicalCheck clinical director Dr Grainne Flannelly stood down as a result of the controversy. However, she accepted that there wasn’t a cover-up “as such”.

“There are a lot of answers still to be answered. We’re pressing a pause button on deciding on a commission until we see what we get” from Dr Scally’s further work and the RCOG review,said Ms Walsh.

Ms Phelan was diagnosed with cancer in 2014 and told of the false negative in the smear test in September 2017. It later emerged that the smear tests of more than 200 women who were subsequently diagnosed with cervical cancer had been re-categorised after an audit, but most of the women were not informed about the audit.

Twenty of these women have died of their cancer, and Sunday’s meeting observed a minute’s silence in memory of them.

Meanwhile, the State is set to take over the operation of a large part of the smear test examination services for the CervicalCheck programme.

All-night talks on Friday between the HSE and two laboratories currently providing the service resulted in agreement that about 15 staff of MedLab Pathology would be offered positions in the Irish public service. A second private lab, Quest Diagnostics, is being offered a contract extension at a higher price.

The existing agreement with the labs was due to run out on Sunday but is being extended until the new deal is signed.