CervicalCheck controversy: State may take over examination of some smear tests 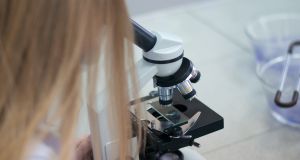 The rate at which labs process slides has slowed considerably since the summer because of concerns raised by the rate of litigation. Photograph: iStock

The State is on the verge of taking over the operation of a large part of the service for examining smear tests for the CervicalCheck programme.

Under plans for the future of the analysis programme being discussed this weekend, screening staff working in Dublin for Medlab Pathology – one of the private operators currently providing part of the existing service – would be offered positions in the Irish public service.

The proposals would also involve a second laboratory which currently provides services for the HSE, Quest Diagnostics in the US, being offered a contract extension at a higher price.

There would be no retrospective indemnity provided by the State to cover liability for the cost of litigation arising from the cases of false negative smear tests which have emerged up to now.

As part of the talks, which have been under way for several weeks, the “cliff edge” – which could have seen the analysis of cervical smear tests cease from this weekend if no deal was reached – has been removed.

Contracts between the State and the two laboratories, which analyse about 260,000 smear test samples a year – or about 90 per cent of the total between them – are due to expire this weekend.

The remaining 10 per cent of smear test analysis is handled by a laboratory at the public Coombe Hospital in Dublin.

However, while agreements had not been finalised on Thursday night between the State and the two large-scale private sector providers, the parties seemed to be inching towards a new accord which would see the screening service continue in operation, albeit at a higher cost and with significant reforms.

It is understood an outline deal has been reached between State negotiations and Quest which would see the company receive a significant increase on the $27 (€23) fee it currently receives per smear test on average. Some sources suggested the new fee could be a little less than double the existing arrangement.

Sources said that a deal could be reached with Quest next week.

The HSE and the laboratories were at loggerheads in the talks over who should accept liability for the cost of litigation arising from false negative smears in the CervicalCheck programme. The laboratories assert the claims environment in Ireland has changed since the controversy broke last April, with the Irish courts more likely to make findings of negligence than in other countries.

With more than 100 cases being brought by women who received false negative smear tests and who are alleging negligence, legal costs arising from the CervicalCheck programme could exceed €50 million, it has been claimed. At issue too is the question of liability for the backlog of tens of thousands of slides which has built up since the controversy began.

The rate at which labs process slides has slowed considerably since the summer because of concerns raised by the rate of litigation. Demand has also increased as thousands of women took up the offer by Minister for Health Simon Harris of a repeat smear where they had concerns.