Only one-quarter of CervicalCheck women give consent for new review 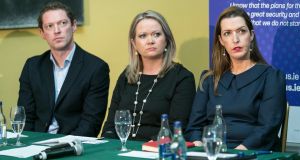 Stephen Teap, Lorraine Walsh and Vicky Phelan at the launch of 221+ in Dublin on Sunday.

A support group for the 221-plus women and their families affected by the CervicalCheck controversy has held its first meeting.

The 221+ CervicalCheck Patient Support Group is funded by the Department of Health but will operate independently of the Health Service Executive.

The group has been set up to represent the “known and unknown” women and families impacted by the CervicalCheck controversy by providing information, advice and support.

The launch on Sunday heard presentations from some of those most prominently involved in advocating for the women, including Vicky Phelan, Lorraine Walsh and Stephen Teap, husband of Irene Teap, who died of cervical cancer in 2017.

The intiative is supported by the Irish Cancer Society, Marie Keating Foundation and Irish Patients Association. The launch in Farmleigh in Dublin was attended by about 50 women and/or family members.

A High Court action by Ms Phelan, from Limerick, over her cervical cancer diagnosis brought the controversy to light. She was diagnosed with cancer in 2014 and told of the false negative in the smear test in September 2017. It later emerged that the smear tests of more than 200 women who were subsequently diagnosed with cervical cancer had been re-categorised after an audit but most of the women were not informed about the audit.

Twenty of the women have died, including Emma Mhic Mhathúna, who was buried last Wednesday just months after making a €7.5 million court settlement for her five children with the HSE and US laboratory Quest Diagnostics. Quest admitted misreading her slides and the admission of liability by the HSE related to failing to disclose the findings of cervical cancer.

The new group aims to provide practical support for women with cervical cancer and the families of women who have died from the disease.

Only about 50 of the 221 women at the centre of the controversy have consented to their smear tests being re-audited in a further review being carried out by the Royal College of Obstetricians and Gynaecologists , Ms Walsh told the meeting.

The RCOG report will therefore be reflective of less than one-quarter of the women, she said, adding: “I’m not sure what kind of answer we will get from RCOG”.

The RCOG review, which is unlikely to be completed until spring 2019, is looking at the slides of 1,850 women in total - the 221 women who were previously audited by the HSE and a further 1,630 whose cases were reported to the National Cancer Registry after they were diagnosed with cancer.

Little is known about these Registry cases but Ms Walsh said 1,060 of these cases had had no previous cytology. She said it number of these women who had not had screening was “frightening”.

“I am now riddled every day with the awful thoughts of `what if?’ which has shaken me to my very core and challenged me mentally and emotionally beyond any physical or emotional challenges that I ever experienced before.”

A scoping inquiry into the controversy by public health doctor Dr Gabriel Scally last month made a number of recommendations on how the Minister for Health and his officials should interact with the affected women and their families.

Dr Scally said the Minister should give consideration to how women’s health issues can be give more consistent attention within the health system. He also said the Department of Health should examine current arrangements for patients to have access to their hospital medical records.

Dr Scally has also called for compensation to be paid to the women.