Covid-19’s impact on the economy makes for grim reading

Cliff Taylor: Key to recovery is how fast restrictions can be lifted

Dublin city centre on a Friday night, normally teeming with life as crowds of people spill out of shops and workplaces into pubs and restaurants has effectively become a ghost town. Video: Bryan O'Brien 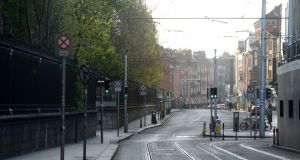 The longer this goes on, the deeper the lasting damage to the productive base of the economy – there will more companies which will never reopen or be hugely constrained if they do.

The first estimates from the Government on the impact of the Covid-19 crisis are notable for two reasons – they are grim and they are surrounded by a high level of uncertainty.

Under the central estimate, GDP could fall by 10.5 per cent this year and domestic demand – a better measure of the economy we live in – by about 15 per cent.

Government borrowing will move heavily into the red, to the tune of about 7.5 per cent of GDP, or €23 billion. The economy could be lifting by late this year and GDP could grow by 6 per cent next year.

But everything depends on how quickly the restrictions can be lifted – and what damage is caused in the meantime. The central estimates from the Department of Finance in the draft stability programme update are based on the restrictions starting to lift over the summer .

If this happens, its forecasters believe that the unemployment rate will peak at 22 per cent in the second quarter before falling to 13-14 per cent by the end of 2020 and going into single figures in 2021.

But we just don’t know how the health situation will play out – and this means “unprecedented uncertainty”. The department also sketches out two other scenarios, where the lifting of restrictions is delayed by another one or two quarters.

This is the bit of the horror movie where those of a nervous disposition would be advised to hide behind the couch. In these scenarios GDP could fall by an eye-watering 14 -16 per cent this year and instead of borrowings of €23 billion, we could see the total rise to €27-€29 billion.

Against this backdrop, it is impossible to even guess what the 2021 budget might look like, though a national recovery programme to scope out the options is to be prepared.

The longer this goes on, the deeper the lasting damage to the productive base of the economy – there will more companies which will never reopen or be hugely constrained if they do.

The recession will “cast a long shadow”, the department warns, with not only damage to company balance sheets, but also a possible impact on foreign direct investment as companies re-examine global supply chains.

Minister for Finance Paschal Donohoe pointed out that the impact on borrowing and the national debt this year was roughly in line with IMF projections for the rest of Europe. And Ireland can still borrow at very low rates.

However, we have a national debt of €200 billion and it will now rise sharply as Ireland returns to heavy borrowing, to about 125 per cent of Gross National Income – the measure which excludes the multinational impact – by the end of this year.

To pay for all this the National Treasury Management Agency, which borrows money on behalf of the State, announced on Tuesday that it would increase its borrowing target for the year to €20-€24 billion, from €10 billion to €14 billion previously. It has already raised €11 billion in 2020.

It is vital for Ireland’s national finance that it can continue to raise this cash at low interest rates and the support of the European Central Bank in the market is crucial.

Our rates remain low but there have been some upward moves in Italian bond interest rates as that country has looked to raise funds. We simply don’t know how the markets will look in six to nine months time.

The next government will need to consider getting borrowing and the debt ratio on a downward curve.

What we know now is that the initial economic hit will be hard and will leave lasting damage, but we still do not know when the restrictions will be lifted to allow recovery to start.

First, people need to start feeling some solid ground under their feet and be convinced that it is safe to go to work, to shop and so on. It is, for now, as basic as that.