Coronavirus – the science: The six milestones Ireland needs to reach before easing restrictions

Chief Medical Officer Dr Tony Holohan has called on the public to continue to adhere to the coronavirus restrictions currently in place across the country in order to drive the Cvoid-19 reproductive rate as low as possible. Video: RTÉ 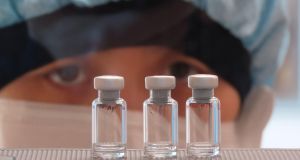 Vaccines doses in bottles prepared by a team of experts at the University of Oxford. Photograph: Sean Elias/PA Wire

These are the hard weeks when remote working is more of a chore; elimination of commuting doesn’t seem to matter when the same old walls of home fuel feelings of “let’s get this pandemic thing over”.

Downbeat mood has coincided with those who want to get back to normal business becoming more assertive, with emphasis on the economy rather than public health. In their midst, are politicians who think they know better than scientists though it has to be said, they are more prevalent in the UK and US.

So in a week, when the World Health Organisation got an unfair bashing on its pandemic response, it was good to see it hold its nerve and provide absolute clarity on easing restrictions.

Any step to ease restrictions and transition must ensure:

2. Public health and health system capacities including hospitals are in place to identify, isolate, test, trace contacts and quarantine them;

5. Importation risks can be managed;

6. Communities have a voice and are engaged in the transition.

The Irish report card on 1 is a tick; done. On 2,3 and 4, not there yet – clusters in homes for older people and lack of workplace preparedness are big outstanding issues. On 5 and 6, almost there but not yet optimal.

Daily deaths
• Still too early to say if US has peaked
• But beginning to look like UK has 🇬🇧
• Successes in dark blue: Australia, Norway, Austria locked down early; gentle slopes

The really hot issue for leading virologists working on SARS-CoV-2 is what type of antibodies are generated by those who are infected.

There is a clear preference for neutralising antibodies; proteins that reduce and prevent infection by binding to the part of a virus that connects to and “unlocks” host cells. They are relatively easy to detect, and are far easier for vaccine developers to generate than the alternative, the immune system’s T cells.

In contrast, non-neutralising antibodies still recognise parts of the pathogen, but don’t bind effectively and so do not prevent it from invading cells – and merely acting as an alert.

Doctors are finding fairly high levels of neutralising antibodies in those having had Covid-19. “It is clear that immune responses are being mounted against Covid-19 in infected people,” virologist Mike Skinner of Imperial College London told the Guardian.

Most virologists believe, however, immunity against Covid-19 will last only a year or two at best. “That is in line with other coronaviruses that infect humans,” Skinner added. That means that even if most people do eventually become exposed to the virus, “it is still likely to become endemic – which means we would see seasonal peaks of infection. We will have reached a steady state with regard to Covid-19.”

Even if the antibodies stick around in the body it is not yet certain they will prevent future infection. Herd immunity cannot be banked on. Ultimately, development and roll-out of an effective vaccine is what will free us from the threat of Covid-19.

Differences between Ireland and the UK have been the focus of intensive debate notably on death rates; testing and contact tracing.

A data cruncher with the Financial Times, John Burn-Murdoch presents excellent graphics often including Ireland. What’s more, he provides a service for all-comers; answering queries via twitter – where he doesn’t know, he promises to come back with answers.

There is only a weak link between population and Covid death toll though low population density helps. That amounts to strong mathematical evidence the key factor in lowering death rate is lockdown. Ireland scores really well on both in contrast to the UK which failed badly on acting quickly – debate over.

It should shift urgently to focus on differences with Northern Ireland. For the Republic, the best way to build on progress is to have all-Ireland lockdown over coming weeks, where protocols match those in Northern Ireland; there is no “border” and both sides benefit.

Many of Ireland’s leading infectious disease specialists are at one on this; the one missing ingredient is political willingness to make it happen. It’s a measure that will facilitate more extensive re-opening while reducing risk of Coronavirus 2.

A memorandum of understanding exists, but sharp divisions within the Northern Executive means actions in the best interests of citizens north and south are not being taken.

A total of 78 potential vaccines are in development. An experimental vaccine that is deemed safe and effective enough to be rolled out in a limited way – to high-risk groups such as health workers – could be ready within weeks or months, under emergency rules developed by drug regulators.

A Covid-19 vaccine could be completed by mid-August, according to a key adviser to the UK government Prof John Bell – human trials on one started at Oxford University last week.

But Bell emphasised on BBC Radio 4’s Today the real issue was not when the vaccine would become available, but whether it would be effective. “[The question is] will it protect people, and that has not been tested and it will only be tested once you have vaccinated a significant number of people and exposed them to the virus and counted how many people have got the virus in that population.”

“If we can see evidence of a strong immune response by the middle or the end of May, then I think the game is on,” he added, adding the next step would then be “the massive issue of how you manufacture at scale many billions of doses”.

The UK has shown shocking tardiness on the emerging pandemic, but is ahead of most countries in planning to scale up production of a vaccine immediately once approval is across the line.

Mission 1 accomplished: Coronavirus is “contained and effectively suppressed” in the Irish population at large. Mission 2 is apply the rigorous approach deployed in hospitals to homes for older people. Mission 3 is loosen restrictions informed by science to avoid the infamous yo-yo effect of viruses, ie repeated waves of infection.

Vaccine progress: It took just a few months to generate 78 potential Covid-19 vaccines; it took 20 years to reach that point in countering malaria.

Testing backlog cleared: Through scientific endeavour, guile and availing of good international relations with suppliers and manufacturers. Ireland is moving to conducting 100,000 tests a week – a necessary step towards rapid test turnaround ability (in effect mass screening). That combined with robust surveillance including app technology makes up the essential mix to ease lockdown.