Coronavirus: Health staff from around the world serve on Ireland’s frontline

‘There’s no voice for foreign doctors here. But right now we’re all in this pandemic together’ 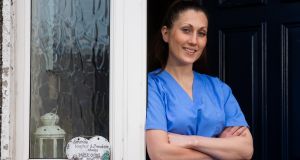 When Mullingar-based Maria Cintra first heard about the coronavirus preparations being made at Midland Regional Hospital in the Westmeath town she immediately felt anxious.

A Norwegian respiratory nurse in the hospital’s emergency department, Cintra would work directly with Covid-19 patients and knew she could easily carry the virus home to her family.

“My daughter is asthmatic; it’s a constant worry that I could make her ill. I haven’t been able to self-isolate from her, she isn’t even four years old. How do you explain to a child that age that you can’t put her to bed?”

Cintra came to Ireland in 2014 with her Irish husband, spending two years working in a nursing home before joining the Midland hospital. Working today with Covid-19 patients, she wears full personal protective gear.

“You’re hot and sweaty and you can’t have a drink when you want, so you get a sore throat. It’s exhausting. Before this, a 13-hour shift wasn’t a problem but now you feel really tired after wearing the mask the entire day.”

Cintra showers in hospital after her shift, throws all her clothes in the wash and disinfects her shoes before stepping inside her home. “I’m doing everything possible to keep my family safe.”

Support from colleagues makes today’s uncertainty more bearable, she says. “It doesn’t matter where you’re from, or what position you previously had, everyone is working together now.

“When this started I was so anxious I would get sick, but I’m nearly getting used to it at this stage. If you get sick, you just deal with it,” says Cintra, who is one of thousands of foreign-born health staff now on Ireland’s Covid frontline.

Foreign health staff began to arrive in numbers in the early 2000s. Most come from India and the Philippines, with smaller numbers from Africa. This year, 125 have been hired, with some arriving early last month.

Extra foreign recruitment is now off the agenda, the Health Service Executive says, adding that travel restrictions mean it is “not a viable response to increase access to nurses and midwives”.

Rodvic Penas, a Filipino nurse working at a major Dublin hospital, came here three years ago. Today, he is one of its surgical team, but now has been given ICU training for PPE-equipped shifts caring for Covid-19 patients.

“It’s really difficult to work with all that gear, the mask can be painful and hurts your nose. It leaves a mark on your face. We’re fortunate because we still have enough stock but we don’t know how long it will hold.”

Penas regularly worries about contracting the virus. “This morning I felt a sore throat and the first thing you think is do I have the virus? I feel paranoid at times but I’m just doing my part to keep myself protected.”

I don’t have an issue with caring for another nationality. That’s part of my calling as a nurse

Penas says he is “privileged” to work in Ireland but also finds that foreign nurses are treated differently from their Irish colleagues. “I don’t want to call it racism, I just feel they’re more favoured than us.”

Though he misses his family, he is happy caring for Irish patients: “I don’t have an issue with caring for another nationality. That’s part of my calling as a nurse, to be able to give service to whoever I’m working with.”

While the number of foreign-born nurses working in Irish hospitals has increased, rising numbers of international doctors are also choosing to work in the Republic.

Ireland’s share of foreign-trained doctors is the third highest among western countries, at 42.3 per cent, according to the 2018 Health at a Glance report from the OECD.

Overseas doctors come here to replace Irish doctors who emigrate in search of better opportunities. In 2018, most new Medical Council registrations were made by non-Irish doctors. However, many of them find it difficult to develop their careers once they are here.

One Brazilian senior house officer (SHO) male doctor, speaking anonymously, says being accepted into the network of Irish doctors is difficult: “It’s nothing to do with racist behaviour.

“You’re just not part of the clique and you didn’t grow up going to the right schools. People here tend to feel more comfortable with those who use the same expressions and have the same background.”

The Irish system does not recognise his Brazilian surgical qualifications, nor does it allow him to join specialist training schemes. “I have to watch Irish people with a year of experience get a job when I have a decade’s experience.”

Nevertheless, he gives his all in the fight against the virus: “Ireland, in my opinion, is one of the countries responding in the best way to this crisis. Ireland could be testing more but we have good numbers here.”

In Brazil, he grew accustomed to working with highly contagious TB and leprosy patients. “We were exposed to weird infections in Brazil; exposure to unusual forms of contamination comes with the job.

“I have asthma and I’m overweight so I’m at risk now,” he says, adding, “But it’s not a risk that goes beyond what I was expecting to meet during my working life.”

Dr Bianca Bandarra, a Brazilian-born SHO in Beaumont, which has the highest number of confirmed Covid-19 patients, thrives on the adrenalin of working in an emergency department.

We could have gone back to our own hospitals at this time, Brazil could do with my help. But I didn’t want to,
my life is here

Saying that she is “thankful” to be working in an Irish hospital now, she says: “I’m really learning from this and really feel part of the team. Everyone is working shoulder to shoulder against this.”

Having trained in hospitals in the suburbs of Rio de Janeiro, Bandarra is unfazed by the pressures of Beaumont. “In Rio there was a chance you’d get shot or mugged during your shift. You didn’t think about it, that’s our job.”

A few weeks ago Bandarra was admitted to Beaumont as a patient after she was diagnosed with appendicitis. “You’re suddenly in the patient’s position and it’s not easy. I started thinking I would catch the virus because I was a patient.”

She is due to return to work shortly, following the surgery. Like many foreign-trained doctors, it took Bandarra a long time to register as a doctor in Ireland.

Even then, she struggled to get locum. Eventually, she got a job in Craigavon, Co Armagh. After seven months of commuting from Dublin she secured a job at Beaumont Hospital.

Formerly a surgeon in Brazil, Bandarra plans to go back to the North to train as a GP, as she is unable to undergo specialist training in the Republic. It’s hard for foreign doctors to be heard in Ireland.

“Right now we are in a position that we can show we really care. We could have gone back to our own hospitals at this time, Brazil could do with my help. But I didn’t want to, my life is here.”

Dr Meenakshi Nursing, an SHO in a hospital outside Dublin, has also struggled to progress: “I see an Irish doctor who is more junior than me and know that he’ll probably become a consultant before me.

“It’s something we generally come to accept; there’s no voice for foreign doctors here. But right now we’re all in this pandemic together, we’re all doing the same work and getting the same exposure.”

Every non-EU doctor here is giving their best but they do not have permanent residency status, or enjoy critical work permit status

Originally from Mauritius, the mother of a three-year-old studied in Canada and Romania before coming to Ireland in 2015. Like Cintra, she feels she cannot self-isolate from her young daughter.

“If I tell her not to come close, she will come only closer. As soon as I get home I go straight for a shower and stay away from the family until I’m completely clean,” she went on.

Recently, there have been calls in the UK for foreign-born NHS workers on the Covid-19 frontline to receive automatic citizenship. Now there is an Irish petition urging that foreign doctors get favourable immigration treatment.

Every non-EU doctor here is “giving their best”, says Dr Khyyam Ali, who set up the petition, but they do not have permanent residency status, or enjoy critical work permit status. So far, the petition has been signed by 2,300 people.