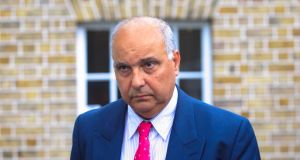 Cavan consultant obstetrician Dr Salah Aziz Ahmed: this was the longest fitness to practise hearing at the council since public hearings began over a decade ago. Photograph: Gareth Chaney Collins

The conduct and outcome of the Medical Council’s inquiries into Dr Salah Aziz Ahmed raises questions about the way doctors are investigated when adverse incidents involving their patients occur.

The fitness to practise hearing also leaves questions unanswered in relation to the practise of obstetrics in Cavan General Hospital, where a number of high-profile and controversial baby deaths have occurred in recent years.

At 25 days of hearings, this was the longest fitness to practise hearing at the council since public hearings began over a decade ago. It was also an extremely complex case, convened at two different locations and involving three difficult and tragic patient cases.

The modular approach adopted for the hearings, with each case dealt with successively, lent the proceedings a disjointed air, and left a long period between the conclusion of some evidence and eventual findings.

In the past even minor cases before the council have on occasion garnered large amounts of publicity, but, in contrast, in this instance an important case failed to draw the attention that, arguably, it merited. This was in part due to the technical nature of much of the evidence, but was also a consequence of the many other news stories vying for attention over the past six months.

About three years have passed since Dr Aziz was suspended on foot of a complaint and the Medical Council began its investigations. This is an extraordinarily long time for any doctor to have to wait for a resolution to an investigation that could determine the entire future direction of his career. It is also an extraordinarily long time for a patient to have to wait in order to get justice and closure on a complaint.

In part, this was due to the three-pronged nature of the case, yet the delay period includes 14 months during which the preliminary proceedings committee of the council considered the matter.

Ultimately, Dr Aziz, who has been on paid leave since 2014, was forced to complain to the council about the delay. He was told the committee was awaiting completion by the HSE of its reports into patient incidents, but all of these were not ready by the time the Medical Council hearing got under way last November.

Once again, it seems that separate but overlapping processes within the health and regulatory systems combine to result in delays, to the detriment of all involved.

The cost of this lengthy and somewhat inconclusive process is likely to amount to a hefty six-figure bill, if not more. In 2015, the council spent €2 million on legal inquiries, none of which would have matched this one for length.

Evidence given during the hearing raised further questions about practices in Cavan. For example, Dr Aziz said there was a delay in getting a second theatre open for a C-section for Patient A in the case. This is disputed by the hospital.

Lawyers for Dr Aziz claimed he didn’t have “the full picture” about Patient C when he arrived in the hospital to deliver her child in April 2014, and failed to diagnose in a timely manner the “catastrophic” event that was unfolding. This was the only one out of 18 allegations where the committee upheld a finding of poor professional performance.

The HSE has carried out a review of management in the hospital but never acceded to demands for a thorough investigation of events in the maternity unit in recent years. As a result, the public is left with piecemeal information from the media, inquests and, now, this inquiry.

Critics of public hearings at the Medical Council often complain that the media devote a disproportionate amount of coverage to the start of a case against a doctor, and relatively little to the end, when the doctor may end up being cleared.

The irony is that the media, and by extension, the public, may never learn about the ultimate fate of a particular case. This is because the decision of the fitness to practise committee is sent forward to the full Medical Council, which will only publish its ultimate decision where a serious finding is made against a doctor.

Dr Aziz’s case may fall into this template, as it seems likely that whatever sanction that will ultimately be applied in his case will be a mild one. We may therefore never know the ultimate outcome of the case.