Just a few drinks will damage the brain, research shows

Alcohol consumption, even at moderate levels, can cause steep decline in mental skills 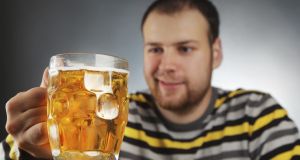 The results suggest Irish drinking limits, which define moderate drinking as under 17 standard drinks a week for men, may be pitched too high. Photograph: iStockphoto

Even moderate drinking is bad for your brain, according to a new study that calls into question current Irish guidelines for consuming alcohol.

Alcohol consumption, even at moderate levels, is associated with increased risk of adverse brain outcomes and a steeper decline in mental skills, the research published in the medical journal BMJ finds.

The results suggest Irish drinking limits, which define moderate drinking as under 17 standard drinks a week for men, may be pitched too high.

Heavy drinking is known to be associated with poor brain health, but up to now findings from studies looking at the impact of moderate drinking have been inconsistent.

In the current study, researchers from the University of Oxford and University College London looked at data on alcohol intake and cognitive performance for 550 healthy men and women over a 30-year period.

Brain function tests were carried out at regular intervals, and at the end of the study participants underwent an MRI brain scan. Factors such as age, social class and smoking, which could have influenced the results, were taken into account.

Light drinking of up to 5.5 units a week conferred no protective effect over abstinence, according to the study.

The more people drank the bigger the decline in their mental functioning and their language fluency, though word recall was unaffected.

The study was observational so no firm conclusions can be drawn about cause and effect.

Recommended drinking limits for British men were sharply reduced last year, to 14 units a week (or 11 Irish units). The definition of “units” differs between Britain and Ireland.

Current Irish advice is that men should have no more than 17 standard drinks a week, and women fewer than 11, to be considered “low risk”. The HSE is currently revising Irish drinking guidelines.