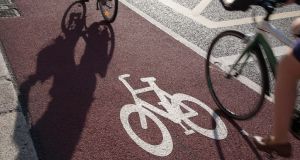 The study found that men aged 20-29 have a particularly high risk of collisions with other vehicles. Photograph: Getty

Cycling in Dublin can be both “scary and hazardous” particularly for men in their 20s who are most likely to come to harm commuting to work on their bikes, according to a new joint study carried out at Trinity College Dublin and UCD.

The study also makes clear, however, that there are enormous health benefits to cycling and calls on the State to improve the cycling infrastructure and to continue incentives for cycling through tax breaks.

The study shows that while many people in the capital benefit both mentally and physically from commuting to work on two wheels, the overall positive health benefits may hide some negative health impacts to individual cyclists.

Using data from the 2011 census, the study of more than 50,000 Dublin city commuters investigated whether the benefits to an individual taking up cycling in Dublin outweighed the risks for all ages, genders and trip lengths.

Among the key results published in the Journal of Transport and Health were that a shift to cycling had an overall positive effect on the health of the population and is associated with a 10-20 per cent reduction in conditions like cardiovascular disease, breast cancer, colon cancer, dementia, depression and type II diabetes.

But the study also highlighted that men aged 20-29 have a particularly high risk of collisions with other vehicles on the road.

This risk was also shown to increase with every extra kilometre they travel, so that some individuals within this category experience a net negative health impact of switching to a cycling commute.

According to the report’s authors, the study provides a scientific basis to support the general perception “that cycling in heavy traffic in Dublin can be scary, and hazardous”.

Senior author on the paper, assistant professor in civil engineering at Trinity College Dublin, Bidisha Ghosh, said that while commuting to work by bicycle “generally brings about considerable physical and mental health benefits for the cyclists, as well as benefiting the rest of the local population through avoidance of toxic emissions and other negative impacts of motorised transport. However, individuals who cycle are also exposed to increased air pollution doses and an increased risk of traffic collision and injury.”

She said the study showed that cities which promote a shift from driving to cycling should “focus on providing safer cycling infrastructure and cleaner air to keep cycling as the healthiest choice of city commute.”

Co-author Ronan Doorley from Trinity added that the improved health of the local population due to switching from driving to cycling should “not come at the expense of beginner young male cyclists” and said the risk of traffic collisions for cyclists in the Dublin network “must be reduced through provision of adequate infrastructure and also by improving driver awareness and perception of cyclists”.

“In light of the positive impacts for the local population and for the majority of cyclists, it remains important to promote economic incentives like the Bike to Work scheme,” said co-author, UCD professor Vikram Pakrashi.