Numbers travelling to Britain for abortion fall to 1980 level 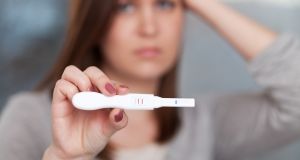 The HSE Crisis Pregnancy Agency said the decline in the number of women travelling abroad for an abortion has become more gradual after a period of steep falls between 2001 and 2007. File photograph: Getty Images

The number of women travelling from the Republic to Britain for an abortion has fallen to the lowest level since 1980, official figures show.

UK records state 3,265 women gave an address in the Republic when attending clinics in England and Wales in 2015, almost nine a day.

This represented a slight fall on the previous year’s figure of 3,451 and a 51 per cent decline in the numbers travelling to terminate a pregnancy since a peak of 6,673 was reached in 2001.

Women from the Republic accounted for 68 per cent of non-residents attending clinics in England and Wales, while those from Northern Ireland accounted for another 15 per cent (833).

The HSE Crisis Pregnancy Agency said the decline in the number of women travelling abroad for an abortion has become more gradual after a period of steep falls between 2001 and 2007.

It pointed to recent research that suggests more women from Ireland are contacting providers of abortion pills. Women who suffer complications after taking such pills should seek treatment from a hospital or GP immediately, it said.

Details of the women who travelled from the Republic to England and Wales last year showed 10 were less than 16 years old.

Some 48 per cent of women who gave Irish addresses were aged in their 20s and 37 per cent were in their 30s.

Some 141 of the abortions on Irish-resident women were performed under ground E, where there is “a substantial risk that if the child were born it would suffer from such physical or mental abnormalities as to be seriously handicapped”.

A county-by-county breakdown of Irish women who travelled for abortions shows Monaghan recorded the fewest, at 15, while Dublin was the highest, at 1,175.

Some 644 women were married or in a civil partnership and 916 were single.

The largest single grouping, according to marital status, was the 1,597 women who said they were single with a partner.

All of the procedures on Irish-resident women were privately funded.

The Pro Life Campaign welcomed the fall in the number of women travelling and acknowledged the availability of the abortion pill online was a factor.

However, a spokeswoman said this trend had been “grossly exaggerated” by pro-choice campaigners.

“The facts are the fall in the number of abortions has been happening for 15 years now, a period of time much longer than abortion pills have been readily available online.”

The Irish Family Planning Association said the figures were an “annual indictment” of Ireland’s treatment of pregnant women.

Chief executive Niall Behan said the IFPA was aware from its services of women being forced to continue pregnancies against their wishes, and of increasing numbers accessing the abortion pill online without proper medical supervision.