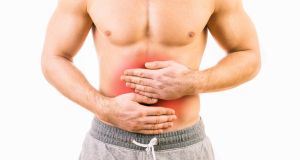 One in every 10 people suffers from irritable bowel syndrome. File photograph: Getty Images

Scientists may soon be able to alleviate the pain experienced by thousands of sufferers of irritable bowel syndrome – by controlling the bacteria in the gut, according to pioneering Irish research.

A study which has run for more than 10 years at University College Cork – and the findings of which are published tomorrow in the prestigious scientific journal, eLife – shows that bacteria in the gut of mice are capable of reducing abdominal pain.

Researchers now believe this may also be the case for humans with irritable bowel syndrome.

One in every 10 people suffers from IBS, a potentially debilitating condition often accompanied by crippling abdominal pain.

Prof John Cryan, who along with Prof Ted Dinan and others, has been carrying out the research at the Science Foundation Ireland-funded APC Microbiome Institute at University College Cork, said they have conclusively shown that, in mice, gut bacteria play a key role in regulating abdominal pain.

It is believed this is also the case for humans suffering from IBS.

Although the bacteria in the gut have long been thought to play a key role in pain modulation, this study proves it categorically, he said,

“In our research we focused on one of the main symptoms of IBS, which is the pain. We found that by targeting the bacteria in the gut you can alleviate one of the symptoms of IBS,” said Prof Cryan. “This is the first time we have conclusively shown that microbes in the gut play a critical role in abdominal pain.”

The team also discovered a significant link between gut bacteria and the brain, Prof Cryan said. The human gut is home to more than 100 trillion bacteria and other micro-organisms collectively known as the microbiota. The microbiota is involved in critical processes such as digestion, metabolism, immune responses and absorption of nutrients.

Until recently, little was known about how the microbiota influences the nervous system; however, it is becoming increasingly clear that gut microorganisms can influence the brain and behaviour.