‘Tact’ lacking in approach of some doctors to CervicalCheck women 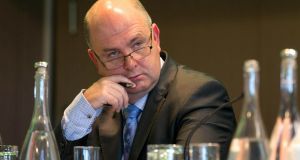 The president of the Irish Medical Organisation (IMO), Dr Peadar Gilligan, pictured at a conference on access to healthcare in Croke Park on Saturday. Photograph: Shane O’Neill/ SON Photographic.

Doctors did not deal with women at the centre of the CervicalCheck controversy as tactfully or diplomatically as they could have, the president of the Irish Medical Organisation (IMO) has said.

Dr Peadar Gilligan said breaking bad news to patients and their families was an incredibly challenging thing to do. He said it can be a very emotional environment.

Dr Gilligan said based on what was set out in Dr Gabriel Scally’s report into the controversy this week, he was sure individuals said things in the heat of the moment that they would have put better if they had considered it in more detail.

He also said things could have been different had doctors the necessary time allocation to do it and the right location in which to do it.

“I know some of the women and their families were distressed by the location in which they were given the information in and the rushed manner in which the information was given to them,” he said. “I think that is indicative of a system that is under a huge amount of strain.”

The report by Dr Scally, a Northern Irish public health expert, into the controversy around the non-disclosure of smear test audit results to women with cervical cancer tested by the CervicalCheck screening programme criticised the policy and practice of open disclosure. He said there was “no compelling requirement” on doctors to disclose and that it was left up to their personal and professional judgment.

Dr Gilligan said it was very challenging to have to impart the type of information that was provided to the women at the centre of the controversy. However, he said this had to be done tactfully.

“It is very fair to say that certainly from the remarks quoted within the Scally report, that that level of tact, that level of diplomacy was not shown in all of the cases,” he said.

He added: “But remember to be in a position to do that optimally, there needs to be a calm environment with the necessary time to do it and the necessary resources to do it.”

Dr Gilligan said the information needed to be imparted extremely well and the answers to the questions need to be appropriate as well.

Speaking at an Irish Medical Organisation conference in Dublin, Dr Gilligan also said there was no such thing as a painless health cutback. He said anyone who maintained health services could be cut back without affecting patient care was telling lies.

Dr Gilligan expressed concerns about delays in hospital building programmers and planned replacement of equipment due to budgetary pressures, which were reported in The Irish Times on Saturday.

He said this reported slow down in capital investment was “hugely worrying”.

“I know in a lot of hospitals their defibrillators, life-saving pieces of equipment, are coming near their end-of-service life and will have to be replaced,” he said.

“So potentially we have a situation where a hospital is being told there is not adequate funding available to replace that life-saving piece of equipment.

“Equally we are potentially looking at a situation where the capital investment in buildings within the acute hospital system is going to be compromised further.”