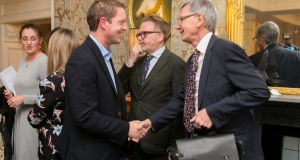 Dr Gabriel Scally and Stephen Teap - who lost his wife Irene Teap to cervical cancer during the launch of the Scally Report into the CervicalCheck screening programme in Dublin. Photograph: Gareth Chaney Collins

A close relative of a woman who died after her cancer was missed in a smear test was told by a consultant during her disclosure meeting that “nuns don’t get cervical cancer”.

Dr Gabriel Scally was tasked with conducting an inquiry earlier this year after it emerged a review of the cases of 209 women diagnosed with cervical cancer concluded they should have received earlier medical intervention.

After the non-disclosure of incorrect smear tests was exposed by Vicky Phelan’s High Court settlement in April, the HSE was instructed to inform the women affected or – in cases where the women were deceased – their families.

In his report, Dr Gabriel Scally describes as “one of the most disturbing accounts” an anecdote relayed by the close relative of one of the women who is deceased.

“As part of the disclosure meeting, the consultant mentioned several times that the late woman was a smoker (it is known that smoking impedes the body’s ability to clear itself of the HPV virus) and they were also told that ‘nuns don’t get cervical cancer’,” he said.

Dr Scally said the women or relatives were generally contacted by telephone and told that they were part of the group of 209 women who had been the subjects of the audit. Most were invited to attend an appointment to be informed of the results.

“Many women recounted that these appointments were extremely stressful and sometimes highly traumatic,” said Dr Scally.

“The scoping inquiry has been told that at least three of these meetings were held in the same room where the women had originally been informed of their cancer diagnosis. In one of those three cases it also happened, by chance, to be the room in which the woman’s mother had died.”

Dr Scally said many of the women and relatives were “extremely upset” at how the disclosure meetings were conducted and, in particular, the answers they received to their questions.

“They often recounted that the attitude and responses of the consultants to the question were negative and defensive,” he said.

One of the women was told the result of the review of her case by telephone in October 2017.

“The nurse who called, explained that the audit was a ‘routine investigation that helps craft future learning’, and the patient was invited to the hospital to discuss the results,” said Dr Scally.

“When she attended, she was met by the registrar, not the consultant. The registrar read out the new result for the slide, ‘high grade changes’, and she was recommended to go back to the city where she was now being treated and discuss it with her gynaecologist there.”

Dr Scally said disclosure was “hurried and took place against a fevered media and political backdrop”.

“The way in which women and families were treated was responsible for substantial hurt and anger,” he said. “Most seriously of all, it resulted in an extremely serious loss of confidence by many women in the clinician who was responsible for their treatment.

“Women were left wondering if a doctor who could not be trusted to tell them the honest truth about their screening, could be trusted to provide them with the best care.”