Almost a fifth of couples worldwide forced to sleep apart due to snoring, says professor 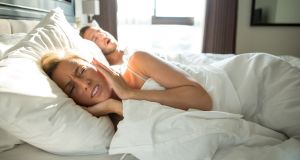 Sleep apnoea and snoring were once thought to be “disorders of middle-aged men”, but latest research suggests snoring affects half of adult men, while sleep apnoea affects a quarter. Photograph: iStock

Sleeping disorders such as sleep apnoea and snoring are rising dramatically in line with an obesity epidemic globally, according to a world-leading sleep expert, Prof Peter Cistulli.

Meanwhile, nearly a fifth of couples worldwide are forced to sleep apart because one partner snores, or gets interrupted sleep, he told The Irish Times in Dublin.

Sleep apnoea and snoring were once thought to be “disorders of middle-aged men”, but the latest research suggests that snoring affects half of adult men, while sleep apnoea affects a quarter.

Increasingly, both are being linked to chronic diseases such as obesity, cardiovascular disease, diabetes and dementia and possibly even cancer, noted Prof Cistulli, a Sydney-based respiratory medicine consultant.

“In some ways, sleep apnoea could be a missing link in our understanding of lots of chronic diseases that was previously unrecognised, or under-recognised – that is feeding into the development of these diseases.”

Speaking before a major medical and dental conference on new treatments for sleep disorders, Prof Cistulli warned that Ireland is now leading the European obesity league.

Questioning the Irish health system’s ability to cope, Prof Cistulli said people must wait a year to see a sleep clinician at St Vincent’s University Hospital, Dublin, with up to a further year before a sleep test is done.

“That is way too long,” he said, “the fact that sleep has survived evolution across all species tells us that it plays an absolute fundamental role in survival, in health and wellbeing.”

Sleep has become the “new frontier” in medicine because of the impact of modern life on people, while light and noise is increasingly affecting sleep patterns and quality of life, he added.

The most important sleep disorders are breathing difficulties associated with snoring and sleep apnoea (when breathing stops for periods in the course of a night’s sleep).

Meanwhile, there is insomnia, or the disruption to the “body clock” associated with shift work and restless legs syndrome – where patients have constantly twitchy legs at night.

In sleep apnoea, intermittent breathing pauses can lead to critical drops in oxygen, which prompts people to awaken once the throat “re-opens” and oxygen levels are restored, but the cycle then repeats.

Progress was made in the 1980s with the arrival of “a strange contraption” known as a CPAP which required a mask to be glued to the nose which worked like “a reverse vacuum cleaner”.

Nearly 40 years later, the continuous positive airway pressure device is still the number one treatment but it is cumbersome, and many chose not to use it because of discomfort.

Currently, such devices cost about €1,200, but Prof Cistulli hoped that advances in digital scanning technology in taking dental impressions and 3D printing would cuts costs.

Doctors and patients must become more aware of the solutions that now lie beyond CPAP “breathing machines”, he said, adding that he hoped the conference organised by Irish Society of Dental Sleep Medicine would help.

Snoring is often the butt of jokes, but it can be a signal that sleep apnoea is developing, while some research suggests that it could disrupt blood flows to the neck and raise the risk of stroke.

Meanwhile, he urged people affected to lose weight, avoid alcohol and some prescription drugs, or to consider trying to sleep in different positions. Surgery at the back of the mouth can help, but it is invasive.