Some Covid-19 deaths are not being reported, coroner warns

Intervention comes amid fears coronavirus deaths are being under-reported 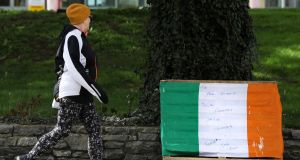 A message of thanks to healthcare workers on a tricolour left outside Naas General Hospital. Photograph: Brian Lawless/PA

Not all Covid-19 deaths are being reported as required by law, the Dublin Coroner has warned.

As a result Dr Myra Cullinane has written to medical staff in hospitals and other locations who are responsible for completing death certificates saying they must comply with the requirement to report “any death in the context of proven or suspected” Covid-19 to her office.

Separately, RTÉ News reported on Wednesday night that nine residents in the Maryborough Centre, St Fintan’s Hospital, Portlaoise, Co Laois, died over the bank holiday weekend. Eight of the residents at the psychiatric centre, aged between 66 and 84 years, had tested positive for Covid-19. The remaining 17 residents are being managed as though they had the virus, the HSE has said.

A woman aged in her fifties and a man in his forties were both working at the hospital when they became ill. A spokeswoman for the Ireland East Hospital Group, which manages St Luke’s, confirmed the deaths and said the group was “deeply saddened” about what had happened.

“We send our condolences to their families, friends and colleagues,” she said.

In her letter, Dr Cullinane reminds medical staff of the requirement under the Coroners Acts to report virus deaths. She adds: “It has been drawn to my attention that such reporting is not taking place in all cases.”

“I have experience of excellent compliance to date and am aware that this is an extremely difficult time for front-line medical staff, however, full compliance with reporting to the coroner is essential as it is providing essential information to public health authorities.”

Asked on Wednesday night whether he was aware of problems over the non-reporting of Covid-19 deaths, chief medical officer Dr Tony Holohan said he was not “but I’m not saying there aren’t logjams or other problems in the system of reporting.

The Coroners Service has advised that deceased patients with respiratory failure and suspected Covid-19 be swab tested so that positive cases can be reported. The deaths of another 38 patients was announced by the National Public Health Emergency Team on Wednesday night, the second highest daily total so far.

There have now been 444 confirmed deaths related to Covid-19 in the Republic. The newly reported deaths include that of a 23-year-old, the youngest person with Covid-19 to die during the current outbreak.

Some 657 new cases of the disease were reported by Irish laboratories on Wednesday as well as 411 processed in a German lab. The new cases, the highest daily total so far, brings the total number of confirmed cases to 12,547. Dr Holohan said the increase in cases in recent days was more likely to be related to an increase in testing rather than a change in the underlying pattern of disease.

He said these sectors were now a priority area for Irish public health officials. Defending the emergency team’s response to nursing home outbreaks, he said work had been ongoing for many weeks to prepare before cases occurred here and the response had been stepped up as challenges were identified.

Northern Ireland on Wednesday extended its Covid-19 restrictions for another three weeks.

Number receiving Covid-19 treatment in hospital falls by over 100