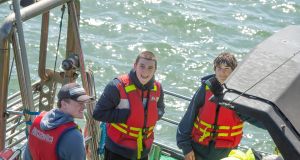 A group of Irish teenagers has spoken of their surprise at returning to an Ireland in lockdown because of coronavirus pandemic after spending the last month crossing the Atlantic in a wooden sailing ship.

The eight teenagers, all transition year students from Dublin, Cork and Wicklow, were among 35 sail trainees who left Antigua in the Caribbean aboard the Jubilee Sailing Training ship, SV Tenacious on March 11th.

Among the group was Robbie Byrne from Greystones in Co Wicklow who told of how surprised he was to return to an Ireland in lockdown after spending the last four weeks at sea and hearing little about the pandemic.

“We received some updates on it – we heard when Boris Johnson got it and we were doing all the safety procedures like washing our hands but we weren’t sure what the death rate was and the infection rate was,” he said.

“We stopped in the Azores about a week ago and we were able to get a wifi connection and we got all the news and realised then how bad it was getting but then we left again so we didn’t hear much more.

“It was a big shock coming back to Ireland today and seeing people wearing masks and everyone being told keep their distance and of course driving home, the roads were empty, there was no one out.”

Among the others adjusting to a changed Ireland when they landed at Cobh this week after they were collected by a pilot boat from SV Tenacious in Cork Harbour was Conor Galligan (16), also from Greystones in Co Wicklow.

Conor and his twin brother, Jack were also coming to terms with Ireland under lockdown as they were greeted by their parents, Robert and Caroline who were waiting for them on Kennedy Quay in the Cork Harbour town.

“When we got on Tenacious at the start, nobody was stressing Covid-19 too much but after two weeks we realised nobody on board had it so life aboard the ship was pretty normal really for the duration of the voyage,” said Conor.

“It was a bit weird seeing all these people wearing masks when they delivered food to the ship – Ireland is a bit weird too with everyone doing the social distancing but I thought it would be worse, more like a ghost town.”

Conor and Jack’s mother, Caroline and Robbie’s mother, Sarah both expressed their gratitude to Jubilee Sailing Trust and SV Tenacious skipper, Capt Simon Caterson for diverting to Cork so the Irish crew members could disembark.

“The Jubilee Sailing Trust have been amazing when we asked if they could bring the kids back here because it would have been a nightmare to get them back from the UK amid the current lockdown,” said Caroline.

“We are so grateful to them for diverting to Cork and the Port of Cork who organised a pilot boat to collect them – thanks to them they avoided having to go to the UK and they are getting off the boat, healthy and safe.”

Sarah Byrne was equally grateful and pointed out that Robbie, like all the others aboard the SV Tenacious, was safe from coronavirus, also known as Covid-19, as the virus began to spread throughout Europe after the initial outbreak in China.

“I know they had some choppy weather since leaving the Azores – it was pretty windy with pretty lumpy seas but in terms of Coronavirus, they were in the safest place on the planet, cocooned out in the middle of the Atlantic.”

Capt Caterson agreed: “The health and safety of our crew is always of paramount importance ... being in the middle of the Atlantic Ocean, with all well on board, was definitely a good place to be given what’s been happening in the world.”