Smoking levels falling faster than increases in e-cigarette use 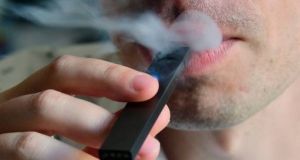 The Central Statistics Office estimates there are around 246,000 people who use vapes or e-cigarettes, roughly one in 20 people in Ireland. Photograph: Getty

The number of people taking up e-cigarettes is lower than the amount who have quit smoking in recent years, new figures show.

In the last five years the portion of the population who smoke has fallen from 23 to 17 per cent, according to the latest Healthy Ireland survey.

Over the same period the number of people who reported to be e-cigarette or vape users only increased by two per cent, from three to five per cent of the population.

Based on Central Statistics Office figures this means there are around 246,000 people who use vapes or e-cigarettes, roughly one in 20 people.

One common fear for health campaigners following the introduction of vaping products in recent years was the practice would simply take the place of traditional cigarettes.

Some 13 per cent of ex-smokers reported using e-cigarettes, while one in ten current smokers said they also used vapes.

Of smokers who made an attempt to quit, some 38 per cent used e-cigarettes during their attempt, according to the Healthy Ireland survey.

The Department of Health survey monitors different health trends in the Irish population such as the rates of obesity and smoking, and other topics such as general health and physical activity.

The latest annual report is the fifth round of the survey and the figures are based on interviews conducted over the last year with 7,413 people living in Ireland aged 15 or older.

One quarter of Irish people between the ages of 25 and 34 have tried vaping, with eight per cent of that age cohort currently using e-cigarettes.

As with smoking, usage of e-cigarettes is higher in socio-economically deprived areas, the survey found.

Slightly more men said they had tried vaping at one fifth of those surveyed, compared to 14 per cent of women.

A recent study published in the European Heart Journal found e-cigarettes damage the brain, heart, blood vessels and lungs. The study by cardiologists was based on tests performed on healthy smokers and mice.

The main positive finding in the latest Healthy Ireland survey for health campaigners was the drop in the rate of smoking.

In 2015, the first year of the study, some 23 per cent of respondents reported to be smokers. This figure had dropped to 20 per cent in 2018, and 17 per cent this year. The number who reported to smoke daily was even lower at 14 per cent, the survey found.