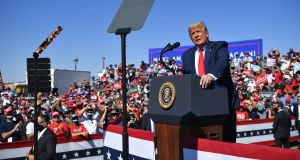 US president Donald Trump at a rally at Prescott Regional Airport in Arizona on Monday. “You don’t have events like this and come in second in Arizona,” he said. Photograph: Mandel Ngan/AFP via Getty Images

US president Donald Trump hit out at leading virus expert Dr Anthony Fauci on Monday as he claimed that people were “tired of hearing Fauci and all these idiots”.

In a call with campaign staff, which was also open to journalists, Mr Trump said that he believed people were tired of coronavirus and just wanted to be left alone. He also claimed that Dr Fauci was a “disaster”– “if we listened to [Fauci] we’d have 700,000, 800,000 deaths”.

“Every time he goes on television there’s always a bomb, but there’s a bigger bomb if you fire him,” he said.

Mr Trump’s attack on Dr Fauci, one of the nation’s top health officials who is leading America’s response to the pandemic, comes as the number of Americans infected by Covid-19 rose past eight million over the weekend. States across the midwest are seeing a surge in cases. Iowa’s positive test rate is now at 51 per cent, while Wisconsin set its biggest single-day record of cases on Friday.

In an interview broadcast on Sunday on the popular TV show 60 Minutes, Dr Fauci said he wasn’t surprised when he learned that the president had contracted Covid-19.

“I was worried that he was going to get sick when I saw him in a completely precarious situation of crowded, no separation between people, and almost nobody wearing a mask,” he said of the White House event announcing Judge Amy Coney Barrett’s nomination to the supreme court on September 26th.

Probed on his comments as he arrived in Arizona for a rally on Monday, Mr Trump said that Dr Fauci is “a nice guy”, but that he “loves being on television”, and has made “a lot of bad calls”.

He also declined to confirm if he would take a coronavirus test before Thursday night’s debate with Joe Biden in Nashville. “Not only am I free, positive or whatever . . . I’m immune they say. They say, if you’ve had it, you’re immune,” he said, despite the fact that research on immunity is still unclear.

Speaking at his rally in Arizona on Monday, Mr Trump took issue with a range of targets, particularly the media.

Arriving on stage, he said that he saw a crowd, “and a crowd bigger than that” trying to get in. “The fake news never report this stuff, right?"

He criticised TV networks for focusing on coronavirus, claiming that America was rounding a corner. “You turn on CNN, that’s all they cover . . . People aren’t buying it, CNN you dumb b***ards,” he said, using an obscenity.

He also declared that he would win the state of Arizona and the election on November 3rd.

“You don’t have events like this and come in second in Arizona,” he said to the crowd of supporters who had gathered under the strong sun to hear him speak at the midday event.

“We’re in first place in Arizona. These fake people back there, the press, they’re fake,” he said, pointing to the press section. Recalling how the polls had underestimated him in the 2016 presidential election, he predicted he would win the contest again.

The Democrats’ vice-presidential Kamala Harris attended early voting events in Orlando and Jacksonville – her first day back on the campaign trail since two of her aides tested positive for coronavirus last week.

Mr Trump will campaign in Pennsylvania on Tuesday accompanied by his wife Melania, who rarely attends campaign events. It will be the first public appearance by the first lady since she contracted Covid-19 along with her husband and son Barron.