Covid-19: Schools and colleges to remain open during Level 5 restrictions 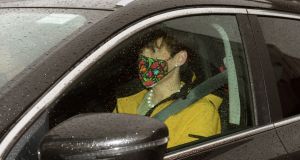 Minister for Education Norma Foley: ‘Transmission rates of Covid-19 in schools are low, much lower than the rate currently in the community.’ Photograph: Dara Mac Dónaill

There is “overwhelming” evidence that schools remain safe settings and they will continue to operate during the Level 5 restrictions, Minister for Education Norma Foley has said.

In a statement, she said the move to increase public health restrictions will support schools to continue to operate safely and sustainably during the pandemic.

Schools are due to close on Friday for the one-week mid-term break and are scheduled to reopen as planned on Monday, November 2nd.

A spokeswoman for Minister for Higher Education Simon Harris said third level institutes will continue to operate under their current restrictions, with most teaching and learning taking place online.

Ms Foley and public health officials are due to meet with teachers’ unions and school managers on Tuesday morning to respond to concerns they have expressed over testing and contact tracing.

“Our school communities have put enormous effort and energy into re-opening our schools and keeping them safe over the first half of this term. Transmission rates of Covid-19 in schools are low, much lower than the rate currently in the community,” Ms Foley said.

“This is a result of the effectiveness of the public health guidelines for schools and the successful implementation and adherence of all in the school community to the guidelines.

Ms Foley said a significant factor in the decision to move to Level 5 was that by doing so we can support our schools to continue to operate safely.

She said the National Public Health Emergency Team (Nphet) has reviewed the national experience of school reopening to date, including the epidemiological data and information gathered through case and outbreak management.

Having considered this evidence, she said Nphet has recommended that schools remain open during Level 5 restrictions, even in the current trajectory of the disease.

“Ensuring that our children can continue to attend school safely is a key objective for the Government. The Department of Education and Skills has been meeting regularly with the education partners including management bodies, teachers’ unions and representatives of the school communities, to provide them with up to date information and to offer an opportunity to discuss any concerns which they may have,” she said.

Latest public health data as of October 19th shows that a total of 10,513 students and teachers have been involved in mass testing. This has resulted in the detection of 246 additional cases.

This equates to a positive detection rate of 2 per cent of additional detected cases, compared to over 7 per cent in the community.

“ This rate is remaining much lower than the comparable positive detection rate in the community, which is over 7 per cent. Public health has confirmed that they are casting their net wide with mass testing in schools to assess evidence of levels of transmission and that this low rate supports other evidence that schools are safe environment for staff and students.”

Teachers’ unions have called for urgent meetings with the Minister and public health officials to reassess the risks facing school staff and students.

The Teachers’ Union of Ireland (TUI) said confirmed cases were at a “vastly higher” level than when schools first re-opened.

“ Of particular concern is the uncertainty around the definition of close contacts and casual contacts in schools,” said TUI president Martin Marjoram:

“What appears to be a lack of consistency and clarity in this regard is causing severe stress and anxiety for school staff. The situation must be urgently reviewed - school staff must have trust in the system and understand the decision-making process.”

The union is also seeking a review for “high risk” teachers in a scenario where the rest of society is effectively locked down.

The Irish National Teachers’ Organisation said it was growing increasingly concerned that the current health precautions for teachers were inadequate.

It said the situation was untenable and said the Government must ensure all necessary protective measures are put in place within the next fortnight to ensure schools can reopen safely after mid-term.

Ms Foley, meanwhile, said latest evidence supports the hypothesis that children are not at increased risk from Covid-19 in the school setting.

“I want to express again my thanks to all those responsible in our school communities for working so hard to implement and keep to the guidelines. This work is paying off, and I urge everyone to remain vigilant,” she said.

“We are all aware of the importance to children of keeping schools open. We have learned through research and direct experience that closing schools has hugely adverse consequences at individual, family and societal level. For children, it impacts on wellbeing, learning, on social development, can worsen educational disadvantage and can impact on child welfare.