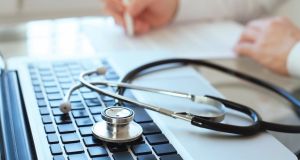 The doctor has been placed on administrative leave, on pay, to allow time for the complaint to be investigated. Photograph: iStock

The HSE has placed a senior medical consultant on administrative leave after staff alleged he posed a significant risk to patients.

Two patients have died and another had a “near miss” due to increased risk since the consultant took up a HSE post earlier this year, two staff members have alleged.

“We are of the view that these adverse and tragic events could have been averted through competent clinical practice,” the two staff members allege in a formal written complaint to the local health service manager.

The doctor, who is Irish, was previously struck off in another country over misconduct with a patient. He later found work in a third country but did not tell his employer about his past. When this was discovered, he was allowed to practise medicine but with conditions. These were lifted some years ago.

He came to Ireland this year to take up a consultant post, having successfully applied through the Public Appointments Service.

The two female employees say their dignity at work has not been respected since the consultant started working with them and he has made them “feel unsafe, uncomfortable and intimidated”.

The complaint raises concerns about the prescribing of medication and details how one patient died after the consultant made changes to his medication.

It is also claimed the consultant placed an undue focus on sexual aspects in his dealings with some female patients.

In September, a female patient contacted The Irish Times anonymously claiming the consultant was “more interested in my sexual functioning” than he was in her condition. “His interviews with me were highly inappropriate and I am scared of the risk this man poses to female patients in particular.”

Asked what action it had taken in response to the serious issues raised by staff and patients and to ensure patients were not at risk, the HSE said it was not in a position to comment on individual staff members.

However, the doctor was later placed on administrative leave, on pay, to allow time for the complaint to be investigated.