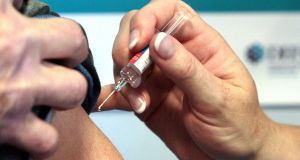 The health service is stretched by high numbers presenting at hospitals and the need to isolate those with flu. Photograph: David Cheskin/PA

Predictions of an early flu season and peak activity around Christmas have been confirmed.

With massive pressure on hospital emergency departments (half of all current attendances are linked to influenza) and an unprecedented demand for out-of-hours GP services, the health service is severely stretched by a combination of high numbers and the need to isolate those with flu from other patients.

We had a good indicator of how our winter influenza season might play out based on the way Australia fared during its winter. While it was not an especially severe virus down under, it hit a full two months earlier than usual.

Most cases in Australia were caused by influenza A, with the H3N2 subtype predominating and H1N1 playing a more minor role. And preliminary reports from the Antipodean flu season suggest there was a good match between the vaccine components and the types of influenza virus that eventually emerged in the population.

Dr Kevin Kelleher, assistant national director of health protection with the Health Service Executive, noted on Friday that while not all of those presenting to hospital with flu-like symptoms would require admission, most who do need a hospital bed have an underlying health condition that has been made worse by the flu.

For example, the probability of hospitalisation for influenza is three times higher in people with diabetes. For those with cardiovascular disease, respiratory infections caused by influenza viruses increase the risk of stroke and heart attacks between three and fivefold in the three days following the onset of flu.

So, how might a person know that they have the flu?

If a sudden onset of symptoms such as fever, cough, sore throat, aching muscles and joints is detected, you should probably isolate yourself in bed. Those attempting to get over the illness should drink plenty of fluids and take paracetamol to reduce their temperatures. Most people will recover with self-care in about a week to 10 days after the onset of infection.

However, it is important to seek medical advice if you develop any of the following symptoms: an increased difficulty breathing, for example the inability to complete a sentence; sharp chest pains that make it difficult to breathe or cough; thick yellow or green phlegm or bloody phlegm; severe earache; uncharacteristic changes in behaviour such as becoming confused or appearing terrified (particularly in children); and being so drowsy as to have difficulty eating, drinking or talking.