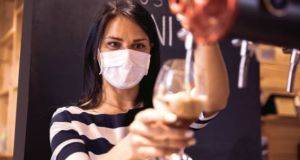 A number of rural Ministers are privately warning that they do not believe the industry can survive another “body blow” if it is not allowed resume business. File photograph: Getty

There is growing pessimism among Government Ministers that pubs will be given the green light to reopen next week amid increasing levels of Covid-19 cases.

A number of rural Ministers are privately warning that they do not believe the industry can survive another “body blow” if it is not allowed resume business. They have said they will push for rural pubs to reopen under strict guidelines, alongside a potential county-by-county approach.

Minister for Health Stephen Donnelly will be briefed by public health officials on Tuesday morning. He will then bring their recommendations to Cabinet where a decision will be made on whether or not to move to the next phase of reversing Covid lockdown measures.

According to figures from the Department of Health on Sunday, there were no further deaths related to the virus in the State but 53 new cases were confirmed.

This means the death toll from the virus stands at 1,763 while the total number of cases in the State rises to 26,162.

Last Thursday saw a spike of 85 new cases. This was followed by 38 extra cases on Friday and 45 on Saturday in what the department’s acting chief medical officer Dr Ronan Glynn called a “clearly concerning trend”.

Dr Glynn said the source of transmission for more than 90 per cent of cases reported on Sunday had been identified.

Meanwhile, the World Health Organisation warned of “response fatigue” and a resurgence of cases in several countries that have lifted lockdowns.

WHO director general Tedros Adhanom Ghebreyesus said: “Many countries that believed they were past the worst are now grappling with new outbreaks. Some that were less affected in the earliest weeks are now seeing escalating numbers of cases and deaths.”

Mexico, which like many countries has lifted tight restrictions imposed earlier this year, reported a record 9,556 new cases on Saturday. It also announced 784 additional fatalities, bringing its total to 47,472 deaths. And the Australian state of Victoria has declared a disaster and placed Melbourne, the country’s second-biggest city, under night-time curfew as it grapples with hundreds of “mystery cases” of coronavirus.

There have been almost 17.8 million confirmed cases around the world and more than 684,000 deaths, according to the US-based Johns Hopkins University.

It comes as Mr Donnelly said that random testing was to be introduced at airports to boost the fight against Covid-19. A timeframe for the introduction of such checks has not been announced, however, as the Cabinet has yet to sign off on the plan. Cautioning against a return to previous levels of freedom of movement, the Minister said the Government’s overriding priority was the reopening of schools.