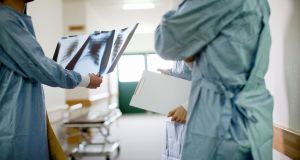 The review of 46,234 CT scans, ultrasounds and chest X-rays concerned the work of a single consultant radiologist who no longer works at the hospital. Photograph: Flashfilm/Getty Images

Four cancer patients have died prematurely, while others are terminally ill, after serious errors were made in the reading of almost 1,300 scans at University Hospital Kerry.

Eleven patients whose scans were read by a locum radiologist suffered a delayed cancer diagnosis and serious impact on their health, a review of over 46,000 tests at the Tralee hospital has found.

One of the patients, now deceased, waited 76 weeks for a correct diagnosis of lung cancer, according to the review. The misreporting of the patient’s chest X-ray emerged during an audit sparked by concerns raised by a colleague about the work of the radiologist.

In another case, a patient had a diagnosis of lung cancer delayed by 51 weeks after a chest X-ray was misreported. The disease was detected when the patient was referred for another X-ray by a GP.

A number of the patients are taking legal proceedings, hospital managers told a press conference to launch the report in Tralee on Wednesday.

UHK clinical director Dr Claire O’Brien said there was a “strong likelihood” the four deceased patients had died prematurely. “Everyone knows the earlier the diagnosis the better,” she said.

Every effort would be made to put the necessary changes in place so there was no recurrence, she added.

The review of 46,234 CT scans, ultrasounds and chest X-rays concerned the work of a single consultant radiologist who no longer works at the hospital, which has a catchment population of 150,000 spread from Kerry, West Limerick and North Cork.

Patient welfare and safety, not competence, was at the heart of the review, Dr Gerard O’Callaghan, the chairman of the review team, said.

The report states: “The review and its results do not imply that the harm caused was exclusively attributable to the consultant radiologist whose work was reviewed. This would be a matter for the Medical Council and therefore is outside the remit of the review team.”

The locum consultant radiologist was placed on administrative leave in late July 2017 and resigned in October that year. The hospital has referred the radiologist to the Medical Council.

Dr O’Callaghan said the radiologist involved in the review “did more X-rays” than anyone else in the five-person department.

Although the radiologist was performing over 3,000 scans a month and concern had previously been expressed about this workload, Dr O’Callaghan said the person’s workload was no greater than any other radiologist.

He also stressed “checks and balances” had worked, and the vast majority of the images under review – 44,831 – were found to be correct. Of the 1,298 found to have “significant errors” there was in fact no impact on the patient.

Among the main recommendations as a result of the review are that the HSE and the Faculty of Radiologists define acceptable volumes of work for individual radiologists.

There is also a recommendation to examine how quality-improvement guidelines can be modified for smaller hospitals relying on locum radiologists.

The South/South West Hospital Group, the HSE and UHK have all three apologised “sincerely and unreservedly” to patients and families harmed by the delayed diagnoses.