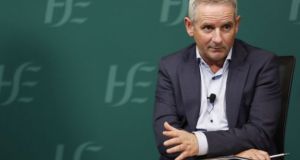 Chief executive of the HSE Paul Reid said Because of a ‘scheduling issue’, not enough staff were on at the weekend when the number of calls increased rapidly. File photograph: Leon Farrell/Photocall Ireland

The collapse of the contact tracing system last weekend, was the result of a sudden surge in cases and a lack of staff to deal with them, according to Health Service Executive officials.

Over three days, thousands of people who had tested positive for Covid-19 were asked to ring their own contacts in order to prevent a backlog of contact tracing calls.

HSE chief executive Paul Reid apologised to the 2,000 cases affected by the disruption.

“It wasn’t a decision taken lightly but it was the right decision,” he told a briefing on Thursday.

To stay ahead of the virus, operational decisions have to be taken quickly and this was a “classic case” of this, he said.

However, keeping the Taoiseach and ministers informed “didn’t work as it should and I take responsibility for that”.

Mr Reid said the issue that arose was a function of the “rapidly accelerating” volume of calls needed. These calls were become more complex and each one was taking longer.

Because of a “scheduling issue”, not enough staff were on at the weekend when the number of calls increased rapidly. The pandemic was “practically out of control”, he observed.

Mr Reid said staffing was being increased by 65-75 a week as recruitment continued.

The service is also being streamlined to improve efficiency, through a merging of the first call in the contact tracing process - informing a person of their infection - with the second call - to obtain details of their contacts.

The taking of specific priority data is being prioritised, so that calls that took up to 50 minutes have been reduced to 20-25 minutes, according to HSE national lead testing and tracing Niamh O’Beirne.

Environmental health officers are being redeployed into contact tracing while 80 cadets from the Defence Forces are also assisting, she said.

Up to last weekend, the contact tracing system had handled all the demand that came its way, Ms O’Beirne said, adding that what had happened was a source of huge regret.

The number of Covid-19 patients in ICU was 37 on Thursday morning with a total of 305 patients in hospital, the briefing heard.

However, emergency department attendances are down almost 20 per cent on the same time last year, while admittances are down 10 per cent, thus easing the pressure on hospitals somewhat.

The number of outbreaks increased last week to 649, from 522 the week before. Some 471 were in private homes, 18 in workplaces and 46 in schools.

Officials said 600 schools have had mass testing based on public health advice, with 15,000 students and teachers tested. The positivity rate was 2.6 per cent.

Investigations remain open into 20 outbreaks in nursing homes - 3.5 per cent of all homes, and while 126 are in receipt of HSE support, only four of these are regarded as having significant concerns.

“We’re nowhere near where we were in the spring,” Ms O’Connor said.

The Citywest isolation facility, whose licence has been extended, is currently accommodating 47 people, along with 83 healthcare workers.