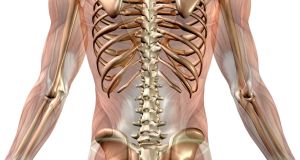 The Magec system was designed to allow for external lengthening of rods using magnets, as the child’s spine develops, without the need for multiple surgeries.

Surgeons who have used a spinal support rod in children with severe scoliosis have been advised to consult with their patients following a product recall by the US manufacturer.

NuVasive, which issued the notice earlier this month, said the problem related to a separation of an end cap component detected in a small number of Magec Model X rods inside the bodies of patients.

This, it told medics, could expose internal components which could lead to their degeneration and the resulting leakage of titanium alloy debris.

“Since Magec X has been on the market in Ireland, a small number of rods of this version have been implanted,” it said in a statement to The Irish Times.

“Patient safety is our highest priority; although there was a relatively low rate of end cap migration, the company chose to voluntarily recall.”

Children’s Health Ireland (CHI), the umbrella body for the country’s main paediatric hospitals, said it is aware of the situation and has “commenced an audit in order to establish if this field safety notice has implications for any of the patients we have treated”.

“In the interim, CHI are fully compliant with the recommended user actions.”

If removal is deemed appropriate by the physician, the device and all associated accessories should be removed and the explanted device returned to NuVasive

The Magec system was designed to allow for external lengthening of rods using magnets, as the child’s spine develops, without the need for multiple surgeries. However, the approach has been divisive in the surgical community with many practitioners preferring the traditional method of spinal support involving the attachment of a basic metal rod that is extended through surgery at intervals of about six months.

NuVasive maintains its system is a proven treatment in effective pain management and in avoiding the “psychological distress regularly encountered . . . with surgeries in traditional fixed growing-rod treatments”.

Although the company issued a product recall, it has not recommended the surgical removal of products but said that option was up to surgeons and their patients.

“If removal is deemed appropriate by the physician, the device and all associated accessories should be removed and the explanted device returned to NuVasive,” it said.

The company did not comment on the cost of having a rod implanted but one source estimated it at about €10,000 before surgical costs. Some Irish patients have travelled abroad for the procedure.

Advice issued in the recall notice includes that surgeons conduct routine clinical follow-ups to discuss risks. If separation of an end cap is detected, which can be done by X-ray, then “removal of the device may be indicated”, it said.

NuVasive also said two versions of the Magec rod were available and that it was working to ensure surgeons had access to the unaffected model.

The Magec system has been available for more than 10 years although the model subject to the safety notice was first produced in July 2017.

The rods previously attracted attention as part of international media reporting on general medical product regulation in 2018. At that time, the CHI issued a statement saying it began to use the rods in 2014, all of which met accepted quality standards.

Coronavirus: Situation in Ireland ‘misrepresented’ because of limited testing