Popularity of vaping not leading to more teen smokers - study 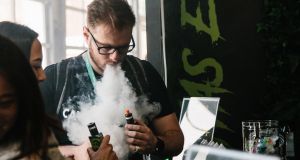 Growth in the use of e-cigarettes has not led to more young people taking up tobacco smoking, new research suggests. Photograph: Alba Vigaray/EPA.

Growth in the use of e-cigarettes has not led to more young people taking up tobacco smoking, new research suggests.

The latest in a string of studies on a subject that continues to divide opinion found perceptions against tobacco smoking have hardened in recent years, although it does not establish why.

The results of ‘Have e-cigarettes re-normalised or displaced youth smoking?’ were published in Tobacco Control by the British Medical Journal (BMJ).

Researchers analysed national UK survey responses from school children between the ages of 13 and 15 since 1998. In particular, they looked at the period between 2011 and 2015 when e-cigarette use proliferated.

“Our results provide little evidence that renormalisation of smoking occurred during this period,” researchers said.

“What is more, positive perceptions of smoking attitudes declined at a faster rate following the proliferation of e-cigarettes, suggesting that attitudes towards smoking hardened while e-cigarettes were emerging rather than softening, as would be expected were smoking becoming re-normalised.”

E-cigarette use has become increasingly popular in Ireland, which has been identified by Euromonitor International research as the third-biggest national spender on products per capita.

According to the researchers in the latest study, surveys in several countries indicate that smoking rates have dropped among young people although the speed of decline is less well understood.

A faster decline would indicate e-cigarettes might be displacing tobacco while a slower fall would suggest “re-normalisation” might be taking place, they said.

The UK schoolchildren were asked if they had ever or regularly smoked and if they thought it was acceptable to do so. Data was available on smoking from 248,324 respondents and on attitudes from 162,324.

Perceptions of smoking also changed - the proportion of teenagers who said that it was okay to try a cigarette dropped from 70 per cent in 1999 to 27 per cent in 2015.

The latest study will feed a growing debate on “vaping” which, as pointed out by the Irish Heart Foundation’s Dr Patrick Doorley in a letter to The Irish Times last February, is “very much in progress”.

“Vaping is about inhaling nicotine, a highly addictive product,” he said. “While there are indications that vaping causes less harm than smoking tobacco and may assist with quitting smoking...there is, as yet, insufficient evidence to be sure that vaping does not carry some level of health risk.”

Dr Doorley said there was not currently sufficient evidence to recommend widespread use of e-cigarettes.

In 2017, the Health Information and Quality Authority (Hiqa) said smokers should not rely on e-cigarettes to kick the habit due to a lack of evidence supporting their effectiveness.

According to a separate study published by the BMJ journal Thorax last year, e-cigarette vapour was found to destroy protective cells that keep lungs clear of harmful particles.