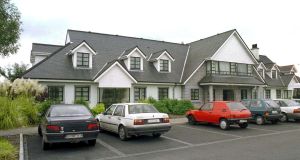 Located on the Dublin Road at Renmore, the current Galway Hospice facility is not fit for purpose and the search for a new site began in 2010. File photograph: Joe O’Shaughnessy

Galway Hospice has decided not to appeal the “devastating” refusal of planning permission for a new facility on the grounds of Merlin Park hospital.

The board of the hospital said it had “reluctantly” decided not to seek a judicial review of An Bord Pleanála’s decision because of the significant costs and risks involved.

The provision of a new hospice in the city will be greatly delayed as a search is undertaken for a new site, it warned.

The current hospice facility on the Dublin Road at Renmore is not fit for purpose and the search for a new site began in 2010. The proposal to build a new facility at Merlin Park was approved by Galway City Council and recommended by an An Bord Pleanála inspector but overturned by the planning board, who said the development would be “inappropriate and contrary to policies to protect natural heritage”.

Objections related mainly to the preservation of habitats for various bird, animal and plant species at Merlin Woods.

In a statement on Thursday, the hospice said its board and management team were shocked and devastated by An Bord Pleanála’s decision.

It still believed the Merlin Park decision was the ideal one, and that patients in Galway with life-limiting illnesses should take precedence over the environmental concerns raised by objectors.

The hospice said it had made significant compromises on the building design that would have secured the habitat and a hay meadow on the site for both patients and the local community.

With its waiting list expected to double over the next decade, it was essential that a new hospice is built as soon as possible, it said.

“The Hospice will now review its options for a new location and will consult with planning officials, advisors and the local community before making a decision on the best way forward to deliver this much needed service.”

1 Miriam Lord: Minister for Agriculture tries to get himself out of the manure
2 Passenger who promised driver a ‘few quid’ after crash awarded €10,000
3 Coronavirus: One more death and 24 new cases reported in the Republic
4 Skeletal remains discovered in south Dublin were of man missing since 2011
5 Barry Cowen tells Dáil he is profoundly sorry for ‘stupid’ drink-driving offence
Real news has value SUBSCRIBE