DNA data could be used by Chinese to devise biological weapons, say senators 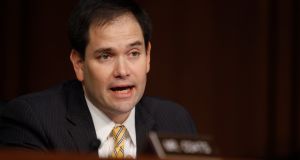 US senators Marco Rubio, above, and Charles Grassley, in a letter to the US department of health and human sciences last month, said the FBI ‘has identified national security risks related to sharing genomic data and recognises China as a primary source of those risks’. Photograph: Jason Reed/Reuters

Two senior US politicians have expressed national security concerns about a US-based company with links to China that owns the Irish business that wants to collect the DNA of 400,000 Irish citizens.

US intelligence services have previously expressed fears about China’s access to US citizen’s genetic data for a range of reasons, including the potential use of the data in developing biological weapons.

The inspector general of the US department of health and human services has been asked to consult with intelligence agencies and report back to Congress on the collection of US citizens’ DNA by WuXi Nextcode and other US-based companies with links to China.

Genomics Medicine Ireland (GMI), an Irish company owned by WuXi, is collecting DNA data on 400,000 Irish volunteers as part of a database project costing up to €800 million.

Access to the database will be sold to pharmaceutical companies interested in developing new drugs for up to 60 serious conditions.

GMI is a 100 per cent subsidiary of a US-headquartered multinational WuXi Nextcode. *

US senators Charles Grassley and Marco Rubio, in a letter to the US department of health and human sciences last month, said the FBI “has identified national security risks related to sharing genomic data and recognises China as a primary source of those risks”.

In a letter sent on behalf of the US Senate’s finance committee, they said a February report from the department raised concerns that the National Institutes of Health gave access to US genomic data to for-profit companies from China, including WuXi Nextcode Genomics and Shenzhen BGI Technology Company, “even though the FBI has identified those companies as having ties to the Chinese government”.

They said they agreed with the decision of the department’s inspector general that she would “work with national security experts to assess the potential consequences of providing foreign entities access to American’s genomic information”.

They expressed concern about the Centers for Medicare and Medicaid Services paying for genetic testing by US entities that have domestic partnerships with WuXI and others with ties to the Chinese government.

“Both BGI and WuXI have publicly touted their partnerships with [Chinese telecoms company] Huawei to expand genomic analysis.

“As you know, Huawei is a state-directed Chinese telecommunications company that, according to the heads of six US intelligence agencies, including the CIA, FBI, NSA and the director of national intelligence, possesses the capabilities to ‘maliciously modify or steal information’ and to ‘conduct undetected espionage’.

“This is the same company that the US recently charged with conspiring to defraud our nation and stealing trade secrets, among other crimes.”

WuXi’s and BGI’s US-based partnerships give them unique access to genomic data, including that of US citizens, the senators said.

“Therefore it is particularly alarming that these two companies have partnered with Huawei.”

In response to the senators’ letter, WuXi Nextcode said it was an international company with its global headquarter in Cambridge, Massachusetts. The majority of its senior management, including the chairman and the chief executive, and the majority of its board members, were US citizens, it said.

“The super majority of our equity interests are held by non-Chinese shareholders.”

A spokesman for GMI said it collected data on a pseudonymous basis that was encrypted and stored in a database housed in Ireland.

“Genomics Medicine Ireland takes its commitment to preserving the data security and privacy of our study participants very seriously,” he said.

The Chinese embassy in Dublin, in a statement to The Irish Times, said WuXi Nextcode was a private enterprise and “has nothing to do with the Chinese government”.

The company had subsidiary businesses in other countries, including Ireland. “They do their own business in those overseas countries. It is totally business issues, not government issues.”