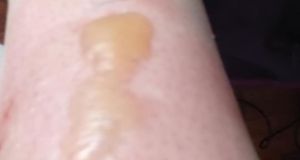 An expert on insects has warned of the dangers of Noble False Black Widow spiders after two Waterford women were treated for severe bites – with one spending six days in hospital.

The attacks, first reported on WLR in Waterford, led to one woman moving to a hotel after her family home was infested by spiders.

John Dunbar, one of the main PhD researchers at the Venom Systems Laboratory in NUI Galway, says new research shows this breed of spider has now spread to 18 counties, with a big concentration in Dublin and along the east coast.

Maria Condon from Ferrybank spent six days in University Hospital Waterford after large blisters formed on and underneath her leg within minutes of having been bitten.

Speaking on ‘Deise Today’, she said she had tried to get rid of the spiders from her house for a number of weeks before being bitten in her sitting room where a spider ran up the inside leg of her jeans.

When she went to hospital, Ms Condon said she was told by staff the bite was from a Noble False Widow spider. It was identified from a photograph she had taken of it after she had captured it under a glass.

“Staff said it was the worst such bite they’d ever come across from a False Black Widow,” said Maria, adding that the spider was brown with white markings on its back and roughly the size of a two Euro coin.

“I wasn’t aware at the time of how serious the infection could turn out but I ended up in hospital for six days after what seemed to be three bites in total,” she says.

Noble False Black Widow spiders are not uncommon in Ireland or Britain but none were recorded here before the 1990s. Experts believe their numbers are on the rise as a result of global warming.

Another woman who lives in Gracedieu in Waterford city said she had called in pest control to get spiders out of her house and garden a number of weeks ago but as they had already laid eggs, the spiders returned.

“I went to bed last Wednesday night and I thought everything was okay,” said Louise, a mother of two. “Suddenly in the middle of the night I woke up with an awful pain in my foot. I knew something had bitten me. I threw back the cover and turned on the light and saw this thing run down the sheets and down over the end of the bed. I didn’t know where it had gone and my foot was very sore and it got worse on Thursday. It had bitten me on my instep. On Friday the swelling got worse and I had to go to hospital to get antibiotics.”

“You’d never expect this in Ireland – you’d never expect to be bitten by a spider and have to go to hospital or whatever,” she added. “I got the pest control people back and they sprayed everywhere, inside and out. It was horrendous. The children were very upset and I was too and we decided to stay in a hotel for the night as I couldn’t stay in the house.”

The Noble False Widow spider, which has colonised much of Ireland since first being recorded here 20 years ago, has previously been observed feeding on Ireland’s only native terrestrial reptile, the Viviparous lizard.

Mr Dunbar said the False Widow spider, in addition to having venom with a powerful vertebrate specific neurotoxin, can produce very strong silk which gives it a real advantage over native spiders in entangling large prey. He called for more research to be carried out.