Cost of nurses’ pay deal running millions ahead of estimate 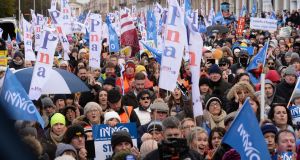 Following the three-day strike by nurses and midwives, the Government agreed in February to a package of proposals brokered at the Labour Court, including a new, enhanced contract for nurses. File photograph: Alan Betson

The cost of the nurses’ pay deal after their strike earlier this year is running millions of euro ahead of the Government’s original estimate and is contributing to an acceptance among Ministers that it will now be impossible to avoid another sizeable financial bailout for the health service this year.

Highly-placed sources said the Government’s new target is to try to confine the health service overrun this year to about €250 million to €300 million or about half of the deficit recorded in 2018.

The Cabinet is to consider a mid-year review of expenditure on Wednesday and a special report on health spending is expected to be given to Ministers next week.

Following the three-day strike by nurses and midwives, the Government agreed in February to a package of proposals brokered at the Labour Court, including a new, enhanced contract for nurses.

However, Minister for Health Simon Harris has now said the most recent estimate of costs for the implementation of the various elements of the Labour Court recommendation was €39 million in 2019.

He said an additional €5 million would be needed for the continued implementation of an agreed framework on staffing.

The Minister also said increases in allowances and the extension of these payments to more categories of nurses and midwives on foot of recommendations by the Public Service Pay Commission in 2018 to deal with recruitment and retention problems would cost an additional €13.7 million in 2019.

Government sources said these figures did not include projected saving on agency staff or productivity measures or other funding measures as envisaged by the deal. These cost-saving measures have not yet been finalised.

Overall costs could also rise higher as they do not include the bill for dealing with psychiatric nurses, who on Friday night suspended an overtime ban to enter into further talks which will run until Wednesday.

Taoiseach Leo Varadkar said earlier this month that the cost of resolving the strike by nurses and midwives was likely to lead to the introduction of a supplementary estimate for the health service in the autumn.

The Health Service Executive had recorded a deficit of €116 million to the end of April, the most recent figures officially available.

There has been intensive behind the scenes activity to control health expenditure since the beginning of the year with a dedicated group of officials from the Department of Health and the Department of Public Expenditure meeting regularly to review budgets. Mr Harris and Mr Donohoe have been conducting regular bilateral meetings.

Despite the ongoing efforts, sources on all sides of the issue concede that the health budget will again exceed its limits this year. However, it is understood that the “real” target is to confine the overspend in health to €250 million to €300 million – or less than half of last year’s €600 million figure.

While the budget will be exceeded, officials believe it can be controlled to a much greater degree than in previous years. “You can’t go into the summer in freefall again,” said one person who has been briefed on the situation, “and we won’t.”