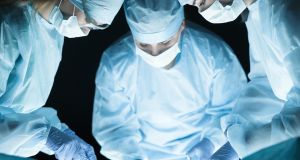 Claire Cahill of the Scoliosis Advocacy Network said she was not satisfied by the CHI statement and said patients should be scheduled for follow-up appointments and, where necessary, new X-rays. Photograph: iStock

All children affected by the recall of a defective spinal implant used to treat scoliosis have been contacted by their surgeons, but medical authorities will not say how many cases there are in Ireland.

Children’s Health Ireland (CHI), the umbrella organisation for the country’s paediatric unahospitals, said a review had found “no adverse events or concerns”.

It follows revelations of a product recall on Magec System Model X support rods, inserted into children as young as two years old with severe scoliosis, a curvature of the spine.

The US manufacturer NuVasive issued the recall earlier this month when it discovered end-cap separation in a small number of rods and the potential for the exposure of components including titanium alloy debris.

Families of those affected in Ireland only found out about the issue this week. On Thursday, CHI issued a statement saying it has finished an audit of case files and uncovered nothing of concern.

“CHI at Crumlin can confirm that it has completed the review of clinical records and X-ray images of the small cohort of scoliosis patients who received Magec System Model X rod after March 2018 [who] were affected,” it said.

It declined to specify how many cases there are, citing concerns over patient identification due to the small number involved. However, it said all patients have now “received a telephone call from their consultant orthopaedic surgeon who explained all the issues involved and dealt with any of their understandable concerns”.

“Each of these patients’ records have been reviewed and no adverse events or concerns have been identified.”

Patients will continue to be monitored and a dedicated phone line established to address concerns remained in place, it said.

However, a medical source said questions remained as to the reliability of the support rods, even where problems in individual cases had not been detected.

“The device has been withdrawn, so if it was put in yesterday it would not be put in today. Why not? Because it might fail,” said the source, who added there was a case now to remove them.

CHI has not yet responded to questions as to whether it anticipates having to remove rods.

However, in its recall notice, NuVasive said any decision to remove them “should be made by the physician in consultation with the patient and/or family”.

Claire Cahill of the Scoliosis Advocacy Network said she was not satisfied by the CHI statement and said patients should be scheduled for follow-up appointments and, where necessary, new X-rays.

“From my perspective, I don’t think I would have been happy with that,” she said of the statement, and questioned the decision not to disclose the number of affected patients.

Ms Cahill’s son Darragh had a Magec rod implanted in 2016, although it was not the model covered by the recent recall. Although her son’s experience had been beneficial and positive, she remains critical of the level of communication between CHI and parents over this week’s development.