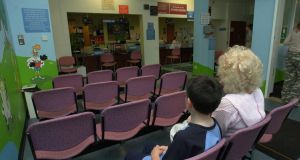 According to the IPA, validation letters were issued by the fund to over 195,300 patients on both inpatient and outpatient waiting lists. Photograph: Bryan O’Brien

Thousands of people awaiting hospital appointments who have not responded to letters asking if they still require them have been removed from national waiting lists, a patient advocacy group has said.

Figures released by the National Treatment Purchase Fund (NTPF) show 19,492 people were taken off the lists when they failed to respond to a verification process.

The Irish Patients’ Association (IPA), which secured the data, said almost a further 16,000 people opted to be removed from outpatient and inpatient waiting lists, many due to having had to attend emergency departments and receiving the necessary treatment as a result.

The NTPF is an organisation that arranges for the provision of public hospital treatment as well as collecting and managing information on waiting lists, the length of which have continued to cause controversy for the health service.

According to the IPA, validation letters were issued by the NTPF to more than 195,300 patients on both inpatient and outpatient waiting lists, as part of a process aiming to keep demand levels up to date.

Since last month, it said, 3,135 patients responded to the letters by asking to be removed from inpatient and day-case surgery lists, and 12,793 from outpatient lists – those awaiting a first consultant appointment.

While reasons for the change of circumstances are not provided, the IPA said they included cases in which patients had their treatment privately or under the NTPF itself, through a cross-border scheme, or by attending an emergency department.

“Patients are on waiting lists in the expectation that they will get better,” said Stephen McMahon, IPA spokesman.

“This validation audit suggests that for some they get sicker, indeed so sick they must attend an emergency department.”

In response to the verification statistics released by the IPA, the NTPF said it worked to deliver shorter waiting times for consultant appointments and surgery.

As part of the process, it said, patients are written to in order to confirm they still require hospital care and if they do not respond a second letter is sent.

“If the patient fails to respond to the second letter or requests removal, the patient’s hospital is informed. Following review by the hospital, where appropriate, a decision is then taken whether to remove the patient from the waiting list in compliance with national protocols,” it said. GPs are also informed and patients can be placed back on the list for the original date.