Government describes Raab meeting leak claims as ‘off the wall’ 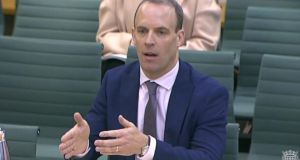 Dominic Raab gives evidence about the Brexit backstop to the Northern Ireland Affairs Committee in London. Mr Raab claims a meeting he had with Simon Coveney ‘was leaked in an inaccurate and misrepresenting way by the Taoiseach directly’ Photograph: PA Wire

The Government has described claims from former UK Brexit secretary Dominic Raab that Taoiseach Leo Varadkar leaked the contents of a meeting Mr Raab held with Tánaiste Simon Coveney as “off the wall”.

The Daily Telegraph and the Financial Times reported Mr Raab had suggested to Mr Coveney that Britain should have the right to withdraw from the backstop, the insurance plan to avoid a hard border if there is no post-Brexit EU-UK trade deal, after three months.

Speaking to the Westminster Northern Ireland Affairs Committee, Mr Raab claimed this information was leaked to the newspapers by the Taoiseach “directly”.

“He was left in no doubt by the Tánaiste on the night that his idea for a time-limited backstop wasn’t a runner,” the spokesman said.

“We made no details of the content of the meeting public and his theory of the Taoiseach leaking his bad idea to major British papers is off the wall.”

A separate Government source said: “The story appeared in The Daily Telegraph, which is a great, big, clonking clue of where it originated.”

A spokesman for the Government denied the allegation, saying: “There is no basis to this allegation. Mr Raab should produce evidence to support it if he has any.”

Mr Raab said on Wednesday: “The conversation I had with him [Mr Coveney] was leaked to the media in terms which were not factually accurate, in terms of the proposal that I had put forward, privately and confidentially at his request.

“It was leaked in an inaccurate and misrepresenting way by the Taoiseach directly. Everyone in the UK government knows the approach that I have been suggesting in relation to the Brexit mechanism, knows that’s not what I have argued for within the UK government let alone to my Irish friends.”

He described his meeting with Mr Coveney as “very constructive”.

“We both wanted to make this work, I found him a great interlocutor and I urged him not to rule out looking at some of the other opportunities and mechanisms in dealing with the exit from the backstop and we agreed, at his request, to keep the meeting confidential,” he said of the Tánaiste.

“Check the media, I did not comment on it, it was only commented on not by Simon Coveney but by the Taoiseach, so ask the question of whether the account of what I was proposing was what the Taoiseach leaked to the media or presented to the media.

“I don’t know the conversation Simon Coveney had with the Taoiseach and I don’t understand what motivation may or may not have been.

“All I’m telling you is that is simply not what I discussed or what I was proposing and I have kept it confidential.”