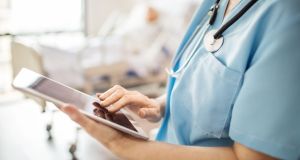 Nurses and midwives make up one third of the total workforce employed in the public health service, despite a decline in their numbers over the last decade, according to the Public Service Pay Commission.

The loss of nurses and midwives was “not matched by a corresponding reduction in demand placed on the public health service generally,” the commission said. “In fact demand increased over that period and continues to do so.”

It was apparent, the commission said, that disputes over the adequacy of staffing levels have existed in respect of nurses and midwives since 2007. “This is primarily due to the application of the public service moratorium and other budgetary constraints.”

While nursing and midwifery numbers have increased since 2013, submissions to the commission by both management and staff confirm this increase is not simply as a result of the lifting of the recruitment moratorium, the commission said. The increase also required the development of a wide range of special recruitment initiatives to both attract and retain nurses and midwives from the domestic market and abroad.

The nursing and midwifery workforce remains predominately Irish at more than 86 per cent.

However it said while increases in staff numbers indicate that “some successful recruitment” has taken place since 2013 it “cannot rule out the possibility that employers sought to take on a higher number of staff but were hindered by recruitment difficulties and/or budgetary constraints”.

General and children’s staff nurses numbers grew by an average of more than 350 per year during the last four years, making this the area with the largest increase, but psychiatric staff nurse and intellectual disability staff nurse numbers declined over the same period by an average of 42 per year and 14 per year respectively.

The commission said its research suggested that an emerging challenge in relation to the retention of nurses and midwives is the increased demand for services which, in many instances, can lead to consequential increase in the ratio of patients to nurses/midwives, with staff reporting a “high level of burnout and low level of job satisfaction” it said.

“The Commission is also aware of the increasing demands being placed on the profession with the rapid changes in health service provision against the backdrop of proportionately less resources, particularly over the last decade.”

It said it had been “ left in no doubt” that nurses and midwives were “seriously aggrieved at what they regard as anomalies in the current pay structures relative to other professions working in the public health service”.

But it said it was “not persuaded, based on the evidence available, that current pay arrangements are, in themselves, a significant impediment to recruitment”.

It said it acknowledged the very high quality of care provided by the nursing profession to patients in hospital and community care settings.