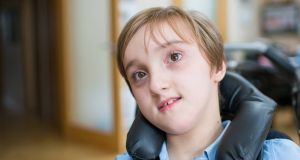 Parents of children with scoliosis are being forced to play “Russian roulette” with their loved ones’ lives as the long wait for surgery continues, the father of a teenager with the condition has said.

The parents of Sophia Daly, who suffers from cerebral palsy, arthrogryposis and scoliosis, have raised concerns about their daughter’s welfare after her scheduled surgery was postponed in August following more than a year of waiting.

Twelve-year-old Sophia developed scoliosis in 2013 and underwent surgery two years later after spending 16 months on a waiting list. Her father, Aaron Daly, said his daughter’s spine “curved over 100 degrees” and “her internal organs were squashed” in the months leading up to the treatment.

In April 2017 Sophia was placed on an “active waiting list” at Crumlin children’s hospital to undergo surgery a second time after her health began to deteriorate again. Earlier that year Minister for Health Simon Harris had promised no child with scoliosis would wait longer than four months for treatment.

In May 2017 doctors noted that the screws in Sophia’s hip had become loose and the young patient was given extra medication to deal with the pain. Notes from Sophia’s medical charts 12 months later warned that the medical team needed to “progress rapidly” in removing the instrumentation from her back.

In June 2018 doctors discovered Sophia had developed breathing problems during pre-operation tests and, on August 3rd, her parents received a letter stating that Sophia was “not clinically fit for surgery due to her respiratory issues”.

The letter said Sophia was still listed as “urgent” on the waiting list and a meeting with her consultant was scheduled for next October.

“The major fear is she won’t get the surgery,” Mr Daly told The Irish Times. “This is our second time going through this with our daughter. Sophia is just being left hanging and we’re being asked to watch our daughter becoming sicker.

“The system is chronically failing our children. The hospital and its team have been very good to us and we know they’re working in a broken system. What we want is transparency from the HSE and for them to address problems like staff, capacity and beds.”

In mid-August the family received a reply to an appeal they made to Simon Harris which Mr Daly described as “a copy and paste letter with the name of the child changed but not addressing any of our issues”.

The letter acknowledged waiting times were “often unacceptably long” but that it was the responsibility of consultants to make clinical decisions about scheduling surgical procedures. The 2018 HSE National Service Plan will “maintain the four-month target in 2018 and beyond”, it wrote.

Asked to comment on Sophia’s situation, the Department of Health said: “The Children’s Hospital Group advise that while they cannot comment on individual cases, they are committed to meeting the four-month target in 2018 and beyond,” it wrote, adding “it is acknowledged that there is still room for improvement” on scoliosis care.

The statement notes the additional €9 million provided to the HSE in 2018 will “stabilise and expand the current capacity to meet the demand for timely scoliosis treatment”.

Meanwhile, the Daly family continue to wait for Sophia’s surgery. “We as parents are being left out in the wilderness with no support and told this is all in hand. We have a situation here where we have to let sick children get even sicker and play Russian roulette with their lives. The HSE is failing and neglecting our children and we’re the ones picking up the pieces.

“What would you do if this was your child? I can’t put it any simpler than that. We feel useless. We’re doing our best to care for Sophia but we’re not meeting her needs and it’s heartbreaking to watch.”