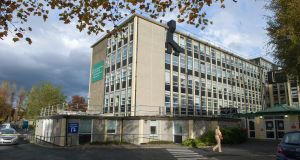 The Coombe is the only one of the three big Dublin maternity units that has not yet started taking referrals for women seeking abortions. File photograph: Barry Cronin

The law on providing terminations in the case of fatal fetal abnormalities is set out in Section 11 of the Health (Regulation of Termination of Pregnancy) Act 2018, passed by the Oireachtas last month.

This section, dealing with a “condition likely to lead to death of foetus”, states that a termination may be carried out where two medical practitioners, having examined a pregnant woman, “are of the reasonable opinion formed in good faith” that the foetus is affected by a condition that is likely to lead to its death either before, or within 28 days of, birth.

One of the two certifying medical practitioners has to be an obstetrician while the other is to have “a relevant speciality”.

The two doctors have to certify their opinion before the procedure is carried out by the obstetrician among them. (It is possible that the second medical practitioner is also an obstetrician and that person could also carry out the procedure.)

Where a pregnant woman is refused a termination under any of the provisions of the Act, she has a right to seek a review of the doctors’ decision by the Health Service Executive.

There is no mention in the legislation of any process for reviewing or overturning the decisions of certifying medical practitioners.

The Coombe is the only one of the three big Dublin maternity units that has not yet started taking referrals for women seeking abortions. In a statement issued on December 31st, a day before the legislation come into force, the hospital said it was fully committed to providing abortion services under new legislation.

“To ensure the provision of safe, high quality, sensitive and compassionate care to women, these services will be provided when the Board and Management of the Hospital are satisfied that the necessary resources have been put in place.

“In this context, these services will not be available on 1st January, 2019.”

The hospital said it had notified the Department of Health and the HSE of its stance.