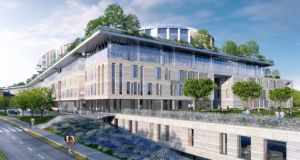 A specialist in emergency medicine has said that the escalating cost of the National Children’s Hospital is going to have an impact on the health system for years to come.

Dr Fergal Hickey, a consultant in emergency medicine at Sligo University Hospital, says that the over expenditure on the children’s hospital will have a knock on effect elsewhere in the health system.

“Our current spending is high, but capital spending is low” he told RTÉ’s Morning Ireland.

Increases in capital spending are now less likely, he added, when “the best part of €2billion is being spent on the children’s hospital. But that cannot be at the cost of other necessary investments,” he warned.

Capital funding is urgently needed for more hospital beds, he said, as Ireland has 2.8 beds per 1,000 population while the OECD average is 4.3.

The large amount of money being spent in the Irish health service is not being spent on the right things, Dr Hickey insisted.

Increasing bed capacity makes economic sense, he said, as it will mean better outcomes for patients which will cost less in the long run.

Overcrowding in Emergency Departments leads to delays which will cost more eventually in terms of longer hospital stays.

“We are wasting money,” he said.

Dr Hickey also warned that the current trolley crisis is effectively “warehousing” patients. Emergency Departments function well, but hospitals are not able to then deal with patients who need to be hospitalised, but for whom there are not enough beds.

“This is a system-wide bed capacity problem.”

He pointed out that of the 606 people on trolleys on Monday, 439 were in emergency departments.

Dr Hickey called for urgency capital funding for hospital beds, but said that the over expenditure on the National Children’s Hospital was going to have a knock-on effect for years to come.